Jane Austen is known to have played classical music on the pianoforte and attended classical concerts. However, there existed a more light-hearted, teasing, popular style of music in the Georgian times that you may not be aware of: the music of the pleasure gardens of London, which reminds one of various scenes in Fanny Burney’s Evelina with its rogues and harlots. 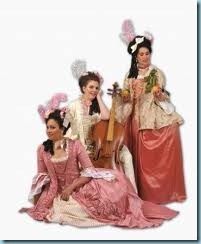 The newest issue of Jane Austen’s Regency World (52) writes about an 18th-century girl band called Lady Georgianna (purposefully with two n’s to differentiate themselves from Lady Georgiana Cavendish, a famous 18th-century socialite). The band consists of three members who dress up in elaborate, 18th-century costumes to perform pop music of the Georgian times:

To get a feel of the humorous, light-hearted music performed by this fun-loving group of musicians, click http://www.lady-g.co.uk/media/audio. The group will be performing at the Jane Austen Festival in Bath this September, so some of you may get the opportunity to hear them live.

Email ThisBlogThis!Share to TwitterShare to FacebookShare to Pinterest
Labels: Music