Review of Love and Friendship

Love and Friendship, the film adaptation based on Jane Austen's novella, Lady Susan, was released in the UK this week.

Unfortunately, the film is only showing in a handful of cinemas and for a very short period of time, which urged me to travel a long distance to catch a rare viewing of this long-awaited adaptation.

As I mentioned in my earlier post, the film was directed and produced by Whit Stillman, the producer of Metropolitan (a modern remake of Mansfield Park). Having enjoyed Metropolitan, I had fairly high expectations for Love and Friendship, and I couldn't wait to see how Whit Stillman had managed to adapt the Georgian style epistolary novella onto big screen.

Stillman's biggest challenge must have been the screenplay - how to to transfer the story, entirely written in letters, into well-flowing dialogue and narrative. I was pleased to see that the film has stayed faithful to the original story and very much responded to my own imagination of the characters, the setting and so on. The worst thing is to see a favourite novel changed dramatically when adapted onto screen, but this wasn't the case with Love and Friendship.

The film correctly portrays Lady Susan (played by Kate Beckinsale), a widower, to be an attractive, charming and intelligent lady, whom we later discover to be a manipulative, selfish person with a lack of empathy for others - this is particularly shown in her interactions with her friend and confidante, Mrs Johnson (Chloe Sevigny). Overall, the film is very well cast, Beckinsale making a credible Lady Susan, perhaps thanks to the fact that she has previously played another less likeable Jane Austen character, Emma (1996), and is clearly quite comfortable with the lengthy, archaic dialogue. Lady Susan's young suitor, Reginald DeCourcy (Xavier Samuel), his parents (James Fleet and Jemma Redgrave) and Lady Susan's suppressed daughter, Frederica (Morfydd Clark), all corresponded to the characters I had created in my mind while reading the novella.

While there is very little scenery in the film, I enjoyed the period-style string music playing in the background, the beautiful Georgian interiors and exteriors and the shiny, silky costumes (which actually create a brushing sound as the actresses move around the room), not to mention the high Georgian hairdos with flowing curls. However, I thought that some of the male characters, perhaps, looked a little too modern, and should have had long hair tied up in a pig tail, like the Austen brothers did at the time.

At the beginning, the characters are introduced posing and what Stillman calls "arch intertitles". There are several characters in the novel and this was probably done to make it easier for the viewers to follow the plot. I would have preferred it if the characters had been presented in a more "natural" way, as they were presented in Pride and Prejudice - a servant announcing their names, as they entered the room, for example. I also thought that the beginning of the film could have been a little more dynamic - I was actually looking forward to a more dramatic entrance of the main character, Lady Susan.

While the beginning is a little stiff in parts and had me yawning a few times (very unlike me during an Austen film!), the film does improve towards the end. The film clearly caters to a more learned, connoisseur audience rather than the general masses - being an independent film-maker, perhaps Stillman has not aimed at a wider distribution of the film, allowing him to take some interesting creative liberties. However, I would like to see the story popularised to make it known to the wider world, but this would require some simplification of the story, more dynamic changes of scene and some more theatrical characterisation. There are a few deja-vu characters typical of the Jane Austen adaptation, such as Frederica's suitor, Sir James Martin (Tom Bennett), who borders on the ridiculous in the style of Mr Collins (Pride and Prejudice), and the theatrical Mrs Manwaring (Jenn Murray).

While the adaptation stays very faithful to the original, there are some very interesting twists to the story at the end, including an adulterous Lady Susan, clearly added in for entertainment value. I will not narrate the story or reveal the final twists at the moment as I don't want this review to be a spoiler. The film is very much centred around the brilliant dialogue and I would certainly recommend seeing it if you enjoy all of Jane Austen's works and yearn to see more.

"They had a very fine day for Box Hill" 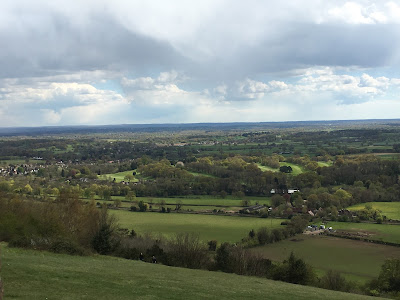 "They had a very fine day for Box Hill", wrote Jane Austen in the seventh chapter of Emma. While many of Jane Austen's locations are imaginary, this important, dramatic scene takes place at a location that still exists with the name of "Box Hill".


As we had a very fine day, we decided to drive to Box Hill with my family. I have been wanting to visit Box Hill for a long time, and was really pleased to visit the famous picnic spot on such a lovely, sunny day.


Box Hill is situated between Leatherhead and Dorking amidst some of the most beautiful countryside of Surrey - called "an Area of Outstanding Natural Beauty".

It is easy to imagine horse carriages along these the old, narrow zig zag roads that lead up to top the hill. 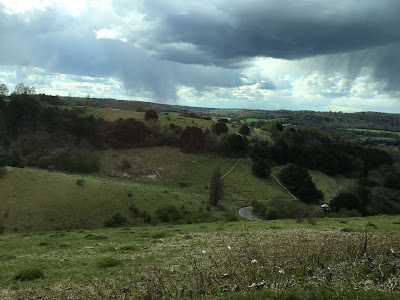 The views from the top of the hill are phenomenal and present a gorgeous panorama over the beautiful Surrey countryside. No wonder the place is still popular with picnickers - a lovely place to admire the views or to paint a landscape (as below). 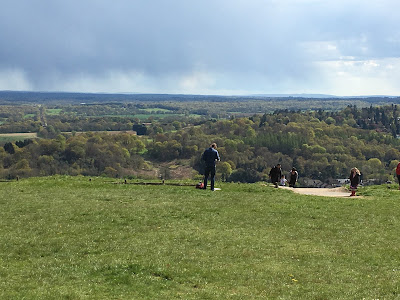 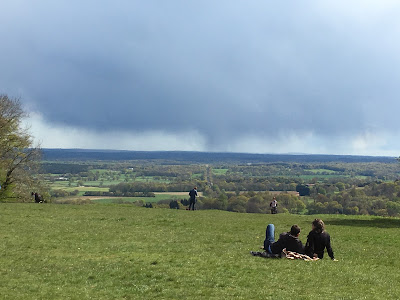 Picnics have been popular ever since the beginning of the 19th Century, although they must be a great deal simpler to organise these days. In Jane Austen's days, it must have demanded a great deal of labour, cooks and servants, to deliver a wholesome picnic. These days, Box Hill is a popular tourist site owned by the National Trust with walking tours and family trails amongst other activities. 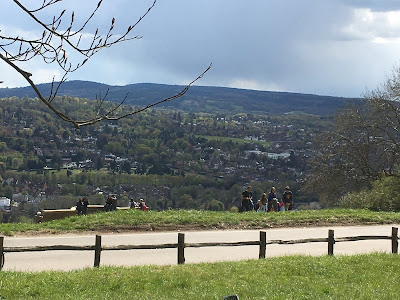 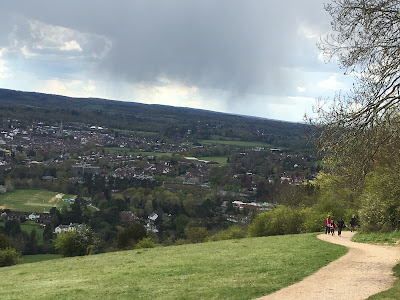 Jane Austen was obviously familiar with Surrey, frequently travelling through the county to London to visit her brother, Henry, in London and Edward in Kent. On the way, she sometimes called on her mother's cousin, Cassandra's family in Great Bookham. Cassandra had married the Reverend Samuel Cooke, who was rector of Great Bookham from 1769 to 1820. He was Jane's godfather and the Austens were close to the family.

Interestingly, Jane visited Great Bookham in June, 1814, the year when she had started writing Emma. During this visit, she might have got inspired to set one of the most important scenes of her novel on Box Hill. Perhaps, like Emma, she visited Box Hill and was "in tranquil observation of the beautiful views beneath her". While I am partial to Hampshire (for obvious reasons), I must say that I have fallen a little in love with the Surrey countryside as well.

Of course, the midsummer picnic starts with a "very fine day, and all the outward circumstances...were in favour of a pleasant party", but as we know, the party ends in a disaster, with Emma not the least to blame. The Box Hill episode shows her the strength of her power over others and humbles her down. Badly done Emma.