I have recently been reading Park Honan’s biography of Jane Austen, “Her Life”. In his work, Park Honan  draws various inferences on where Jane might have got the inspirations and ideas for her novels. Unlike James Edward Austen-Leigh who, in his “Memoir” maintained that Jane Austen did not draw from life, Honan firmly seems to believe that many of her characters are based on actual people who lived around her. Some of the conclusions made are more liberal than others; however, one reference that I found interesting was that of a Miss Benn.

I remember coming across her house when I visited Chawton a couple of years ago. Located just down the road from Chawton Cottage, Thatch Cottage is, as its name suggests, a thatched cottage built in Tudor style.  The cottage looks ancient, though well-maintained – like the scenery, the cottage must have changed very little in the last 200 years or so. That set my imagination racing… 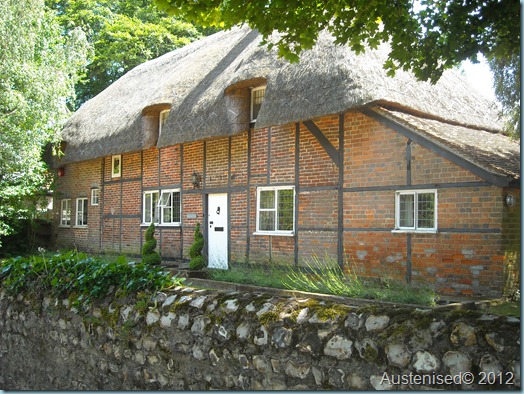 Thatch cottage was the home of Miss Benn, a middle-aged sister of a poor clergyman with a large family. An impoverished spinster, Miss Benn was reduced to renting this old labourer’s cottage and was dependent upon the charity of others.

In Emma, Miss Bates is a poor “old maid” who lives with her elderly mother. Miss Bates is generally liked in the community and kind to everybody.She is described as “a great talker upon little matters…full of trivial communications and harmless gossip” ( p. 14). Although Emma visits her regularly, bringing gifts and exchanging gossip, she also puts her down as being “So silly – so satisfied – so smiling – so prosing – so undistinguishing and unfastidious…” (p. 179). 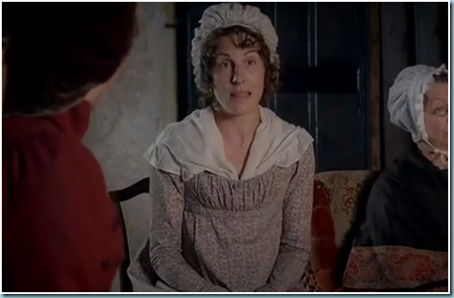 Likewise, Jane Austen used to visit Miss Benn, bringing her gifts in kind. Miss Benn was also invited to dine at Chawton Cottage and Jane actually read out her manuscript of Pride and Prejudice to her, without disclosing her authorship. Jane listened to Miss Benn, although she was boring and talked of next to nothing.

A penniless spinster like Miss Bates, Miss Benn was a lady of modest means. When Martha suggested giving her the gift of a shawl, Jane said “but it must not be very handsome or she would not use it”. She wore a “long, fur tippet” (Honan, p. 267), which I assume was not at the height of fashion at the time - she must have been considered terribly old-fashioned and shabby. “Poor Miss Benn”, Jane often wrote in her letters.

Was it Miss Benn that inspired Jane Austen to draw the caricature of Miss Bates?