Today, the 30th October, The Jane Austen Society of North America are organising an event called “Talk Like Jane Austen Day”, in celebration of the 199th anniversary of the publishing of Sense and Sensibility.

To get you started with the fun, you can visit their website for a large list of language typical of Jane Austen’s time and of her novels and letters. Here are some more features of Jane’s English that I could think of:

To begin the day, you could entertain yourselves with Emma Thompson’s Oscar speech from 1995, where she pretended to be Jane Austen – after this, I assure you that you will indeed find yourselves in excellent spirits! 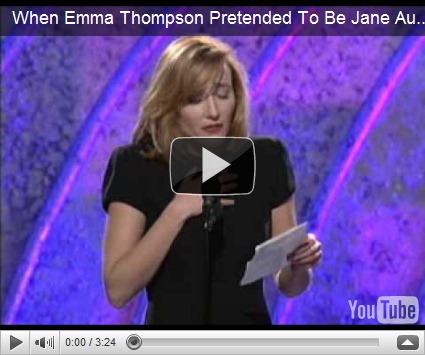 Email ThisBlogThis!Share to TwitterShare to FacebookShare to Pinterest
Labels: Events, Style and Language

I just came across this – the gift shop at the Jane Austen Centre in Bath have set up a draw in which you can win a made-to-measure Regency style gown. The draw closes on 20th November, so all those planning to participate in next year’s dress parade, don’t miss this exciting opportunity! 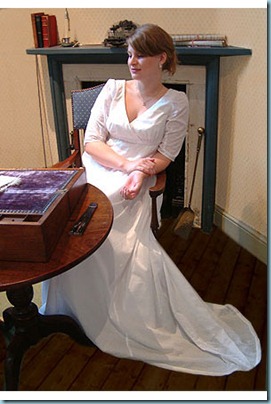 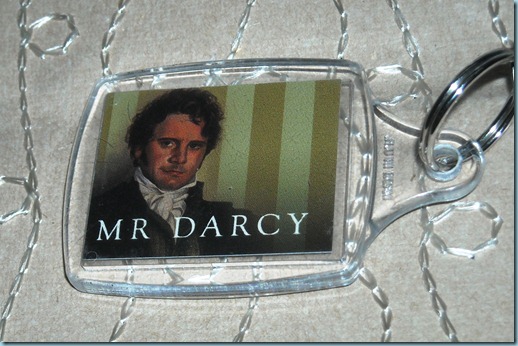 My favourite part in Pride and Prejudice has to be towards the end (Chapter 60) after Mr Darcy’s second proposal to Lizzie. Lizzie asks Darcy how he first fell in love with her. 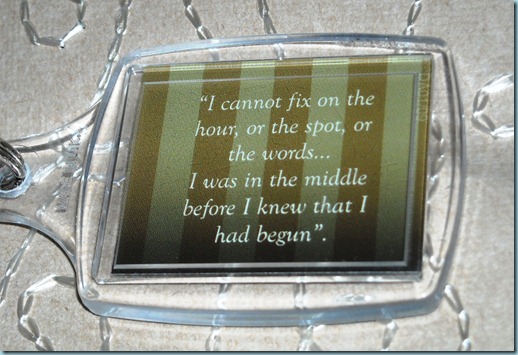 "I cannot fix on the hour, or the spot, or the look or the words, which laid the foundation. It is too long ago. I was in the middle before I knew that I had begun."

Whenever I take my bike out, I see the smug look on “Mr Darcy’s” face on the key ring and recall this beautiful scene from my favourite book…

Email ThisBlogThis!Share to TwitterShare to FacebookShare to Pinterest
Labels: Pride and Prejudice, Quotes

On my trip to Bath, I had the opportunity to visit the Georgian House Museum. The museum is located at 1, Royal Crescent – one of Bath’s finest localities. 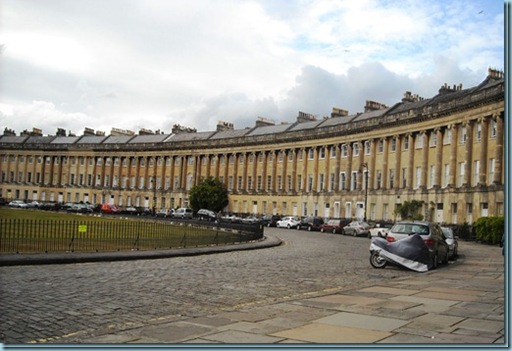 The Royal Crescent is an elegant Georgian terrace of 30 classically designed houses in golden Bath stone. The Crescent was designed by architect John Wood the Younger between 1767 and 1774. Located close to the Circus and the Victoria Park in the Upper Town, the Crescent is an impressive sight, with lovely views across the city.
The below picture from 1829 is from the Bath In Time website, which provides image archives of Bath throughout the ages. 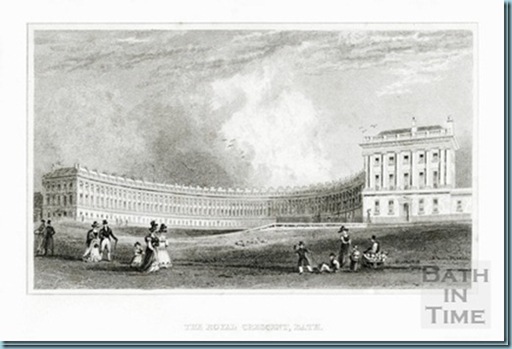 In Jane Austen’s days, the Crescent provided luxurious lodgings to Bath’s aristocratic elite who came in to take waters and to enjoy the pleasures of the “season”.  People would go to the Crescent for an afternoon stroll, take in a bit of fresh air and meet other members of the gentry.
Jane Austen mentions the Royal Crescent in Northanger Abbey (Chapter 9).
As soon as divine service was over, the Thorpes and Allens eagerly joined each other; and… they hastened away to the Crescent, to breathe the fresh air of better company.
Mrs Allen tells Catherine that she met with Mrs Thorpe and “We walked along the Crescent together for half an hour.” “We agreed to take a turn in the Crescent, and there we met Mrs. Hughes, and Mr. and Miss Tilney walking with her.”
It appears that meeting people was an integral part of an afternoon stroll by the Crescent. In 1801, Jane writes to Cassandra, “On Sunday we went to church twice, & after evening service walked a little in the Crescent fields, but found it too cold to stay long.”  In 1805 she writes, “We did not walk long in the Crescent yesterday, it was hot & not crouded enough; so we went into the field & passed close by Stephen Terry & Miss Seymer again”. 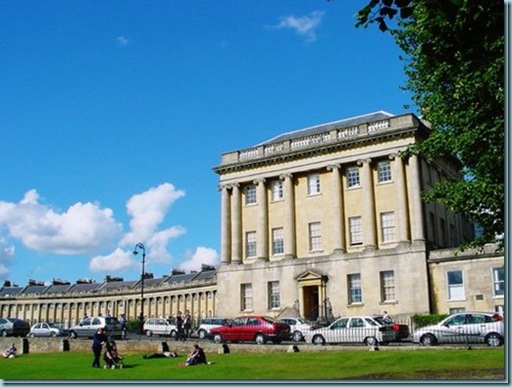 From: http://bit.ly/bw2R1O
The Museum is the first house on the right. The Georgian town house has been restored to its former glory and a tour of it creates a vivid picture of Georgian lifestyle. The house has been furnished in a style that a rich family would have preferred; richly decorated rooms with heavy draping, grand paintings, authentic china, textiles and furniture.
The drawing room, dining room, bedroom and study were interesting and had plenty of detail. The guides to the rooms were knowledgeable, with plenty of stories to share! The downstairs kitchen was a fascinating place to visit. It was well stocked with period gadgets, bake moulds, pots and pans… such a working kitchen that I could almost imagine myself rolling up my sleeves and starting to cook there and then!
Jane Austen herself did not live in a grand house like this, but will have been familiar with many similar houses on her visits to friends and family. For anyone interested in the Georgian lifestyle, I would warmly recommend a visit to No 1!
Unfortunately, photography was not allowed inside the museum, but you can see some photographs and further information on the museum at their website here.
References:
Jones, V. (2004). Selected Letters by Jane Austen. OUP.
Posted by Anna at 11:40 PM 3 comments: 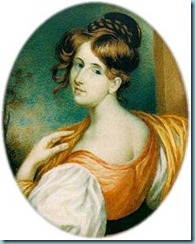 From: http://bit.ly/adyzh1                         From: http://bit.ly/aK498V
Thanks to the recent flow of articles on Elizabeth Gaskell to mark her bicentenary, I was inspired to explore the links between Austen and Gaskell.
Although Elizabeth Gaskell lived and wrote some 40-50 years after Jane Austen, Austen’s influence can clearly be seen in her writing. In the 1860’s, Austen’s novels were being republished and were perhaps more popular than ever. It would not be surprising if Gaskell herself followed Austen’s style, or if her books were compared to those of Austen.
It is not difficult to find similarities between both writers. Both authors captured English country life proficiently. They both lead a quiet life in a country parish, surrounded by clergymen; Jane Austen’s father and two brothers were clergymen, while Gaskell was married to one. With their limited experiences, they both describe the milieu and society of small country towns and villages vividly with immense imagination. 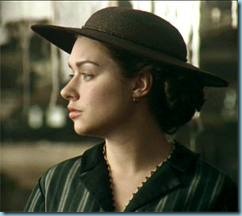 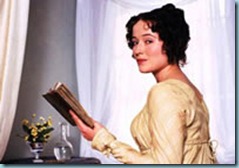 Girls blinded by pride and prejudice.
Margaret From: http://bit.ly/bMOpRu                                               Lizzie From: http://bit.ly/d0MAJs
Both authors manage to capture a wealth of characters and portray their personalities through lively dialogue. Gaskell’s Cranford with its country spinsters reminds you of Austen’s Highbury in Emma – in both novels, we meet the typical gossiping, conspiring, yet kind and charitable personalities. Like Austen, Gaskell has an array of lively female characters, who are brought to life through excellent dialogue and witty repartee. Margaret, Gaskell’s strong, dynamic female character in North and South, is not a far apart from Pride and Prejudice’s Elizabeth in attitude and intelligence – and in her prejudice of the Northern industrialist, John Thornton.
As noted by Janine Barchas in her article, both authors selected a very similar, limited array of first names for their heroes and heroines. Like Austen, Gaskell has chosen names very typical of the period: Fanny, Margaret, Frederick, Susan, Henry and John. 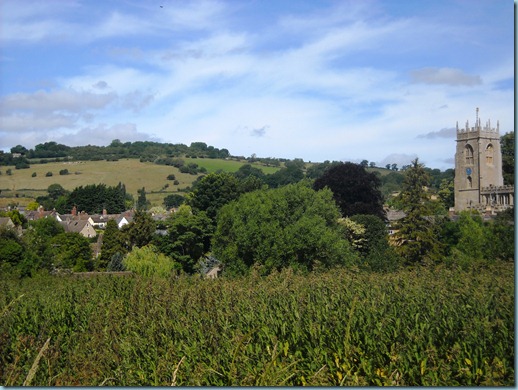 Austen’s rural idyll.
While Austen chose places, imaginary and real, situated in Southern England, where she grew up, Gaskell’s stories take place in the North -compare Austen’s rural Devon, Hertfordshire and Surrey to Gaskell’s native Cheshire. This is where we come to the major differences between the writers. English country life, as Austen describes it, was still agricultural and idyllic. By Gaskell’s time, the emergence of railways and industrialism had changed the scenery, and people had had their taste of excessive realism, which entered the world of literature and the arts.

Manchester as Gaskell knew it. From: http://bit.ly/dzB03S
Compared to Gaskell, Jane Austen’s world view was still limited and narrow. Being a single woman, she always writes from a female point of view, and there is no scene in her books in which no woman is present. In comparison, Gaskell’s social sphere was larger, she was married with children, she had travelled more and seen more. Manchester, where she lived for a long time, was at the heart of the industrial revolution, and perhaps through her charitable work, she was aware of the disadvantages and grievances experienced by the laboured class of the time.
While Gaskell’s Wives and Daughters and Cranford remind you of Austen’s novels, North and South and Ruth are somewhat closer in style and content to fellow Victorian writers, such as Dickens, Bronte and Hardy. They describe hardships, illness and emotions with pathos, from a drastically different perspective. They are concerned with themes, such as feminism, social reform and workers’ rights well ahead of many other authors.
Gaskell, as an author, had a social consciousness and, through her literature as well as through her charity, she wanted to make the world a better place. As opposed to Austen, who describes her immediate society from her personal experience, Gaskell deals with the society at large.
Jane Austen wrote from her limited experience and famously declared to the Prince Regent’s librarian, Rev. Clarke, to be “the most unlearned and uninformed female who ever dared to be an authoress.” Austen has been criticised for being too shallow in her approach, and writing from a tiny microcosm of society. However, the difference lies in focus; while Gaskell is clearly a social novelist, Austen goes deeper in her dealing with the human nature and its foibles. Through her sense of irony and witty dialogue, she explores the manners and morals of people and produces a wealth of timeless characters, who are still realistic and relevant in our society.
Whose literature you prefer, is clearly a matter of taste – do you prefer to read about the society at large, or about the human being as a member of a microcosm of the society?
In conclusion, I think that both the authors are brilliant and both deserve to be appreciated as classic authors of English literature. My choice would still be Austen – I can read her books again and again and still learn new things that I didn’t notice before.
This article is but a scratch on the surface of the link between Gaskell and Austen, but you can study this topic in more detail through the following fascinating articles on the life and works of Gaskell:
Jane Austen in Vermont: Elizabeth Gaskell Bicentenary Blog Tour: Your Gaskell Library

Not to forget this detailed and interesting article: