Regency Childbirth and Other Musings… 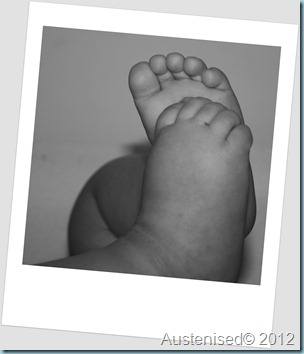 Wow! It has been a long time since I last worked on this blog. I have been totally engaged by the life-changing event of the birth of my child and looking after my baby, with very little time to dedicate to my research on Jane Austen. In fact, I seem to have forgotten to post the Conclusion to my last series of articles, which I have only just posted! Apologies for disappearing from the blogosphere! I hope I will be able to post something every now and then, although my baby is still keeping me extremely busy.

This post will be a bit of a personal ramble, really. Last night, as I was lying awake in bed in between feedings, having been woken up about 10 times so far and unable to fall back asleep, something shocking occurred to me. As a person who adores the Regency era and would love to be taken back to those times, it disturbed me to realise that, had I given birth in those days, I would probably have died at childbirth together with my child!

I went through a long labour of 12 hours, only to find out at the end that the baby was unable to descend due to “something wrong in the bone structure”. Although I tried pushing the baby out, in the end the Dr sent me to the OT for an emergency Caesarean section – that was the only way to get the baby out on time. Thank goodness, we were both fine at the end of it and my baby is now thriving! But it scares me to think that, without the modern invention of a Caesarean section, I would not have been able to deliver my baby.

That reminded me of my last post, where I explored Jane Austen’s romantic connections and analysed why Jane Austen perhaps chose never to marry. She was aware that, (quoting myself) “after marriage, her life would be a stretch of continuous pregnancy and child-bearing, and having seen her sisters-in-law suffer from bad health and even die of childbirth, she was probably not attracted to the idea of motherhood. “

Now I wrote this before I myself went through a partly dramatic childbirth, the idea of which now seems distant. But is it by fate that I live in the modern era and have had the fortune to avail of modern medicine to help me survive? Would I actually have been so fortunate, had I lived at Regency times?

Perhaps Jane Austen did make a wise choice never to marry. Though - before you point out - she did of course die of other reasons in the end – but very few people survived to ripe old age in those days. Had I been informed, knowing the situation of my own health, I probably would have made the same choice as her. But here end my melancholy thoughts…