A Moral Tale With Georgian Cougar As Anti-Hero

Much as I love the six great novels written by Jane Austen, there is one commonly classified as a minor work that has always ranked highly amongst my list of favourites: Lady Susan. It’s about time that I discussed this novel, which is so rarely touched upon in the Austenite world. Spoiler Alert!

Lady Susan is a short, early novel, most likely to have been written in 1793-94 when Jane Austen was just 18-19 years old, but not published until much later posthumously by his nephew James Edward Austen-Leigh in his 1870 Memoir. An epistolary novel, Lady Susan is cleverly written in letters, which requires perhaps more concentration than an ordinary novel written in prose, but gives us a thorough idea of Jane Austen ‘s early style of writing – we mustn’t forget that Sense and Sensibility, initially named “Elinor and Marianne,” started out as an epistolary novel, too. This was a style highly popular in the 18th Century and favoured by many of Jane Austen’s favourite writers, such as Fanny Burney for example.

I was excited to find out that Lady Susan is finally being adapted on screen -by none other than Whit Stillman who directed Metropolitan, an excellent modern adaptation of Mansfield Park back in 1990. Interestingly, the film is called “Love and Friendship”, not to be confused with another work from Jane Austen’s juvenilia. I can’t wait to find out how Stillman has adapted this epistolary novel  into a captivating screenplay with Austenesque dialogue, and to see the pre-Regency era costumes that we have had a glimpse through the Daily Mail. Stillman gives us an exciting preview of the movie in the making on Twitter:


What interests me about Lady Susan, however, is why did Jane Austen never revise the novel and submit an improved version for publishing? To be sure, she could have made it longer and more detailed, adapted the letters into prose and added in her trademark witty dialogue?

Lady Susan is essentially a moral tale, echoing the themes of “Les Liaisons Dangereuses”. The main character is a beautiful and charming 35-year-old lady, very recently widowed and left with a 16-year old daughter, Frederica. At the beginning of the book we find out that Lady Susan has left Langford, the household of her friends, Mr and Mrs Manwaring, to escape the spreading rumours about her scandalous behaviour with the family. We learn that she has been flirting with   both Manwaring and with his daughter’s suitor, Sir James Martin who had been set to marry their daughter, Miss Manwaring. Angering the whole family, Lady Susan retreats to to Churchill to stay with her late husband’s family, the Vernons, who seem to be aware of her wrongdoings and about her frivolous nature. 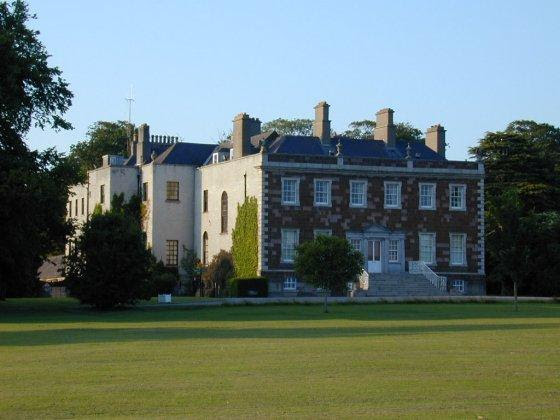 Newbridge House in Dublin as the setting of “Love and Friendship” (image from Wikipedia).

Mrs Vernon describes Lady Susan as “artful and ungenerous”, but also “excessively pretty”, with “fine, grey eyes and dark eyelashes”. Lady Susan “possesses an uncommon union of  symmetry, brilliancy and grace”, “her countenance is excessively sweet, and her voice and manner winningly mild”. Lady Susan is “clever and agreeable”, and it is with these charming qualities that she is able to cast a spell on several men of her choice and deceive one person after the other.

“Unprincipled” and “deceitful”, Lady Susan flirts her way with men both young and old to secure a rich husband for herself  and for her daughter while engaging in a relationship with the married Mr Manwaring. With her universal charms, she manages to persuade Mrs Vernon’s brother, Mr De Courcy, that she was not at fault and was indeed a charming human being, although he had previously been convinced that Lady Susan was “the most accomplished coquette in England”. He has changed his mind and now finds Lady Susan attractive with “gentleness and delicacy of manners”. Others advise Reginald against the match, but the young man of 23 is bewitched by her charm. All the while, the reader realises that, in her search for “universal admiration”, Lady Susan is a narcissistic, conniving villain, putting on an act and manipulating others, always acting in her own interest.

Lady Susan is also considered to be cruel and unkind to her daughter. As discussed by Horowitz, in Georgian books of conduct to be a good mother was a central theme, and Lady Susan is certainly no example of one. She has no affection for Frederica, considering her a “tiresome” and “stupid girl”. She is determined to force her to marry Sir James against her will, and sends her off to boarding school in London to make her uncomfortable so that she would eventually agree to her schemes. In the end, as in any other novel by Jane Austen, vice is punished and Reginald realises the true nature of Lady Susan and breaks off the engagement.  The vicious Lady Susan ends up marrying second best, someone she had designed for her daughter, while the virtuous Frederica secures a match of her own heart.

Similarly to the other great novels by Jane Austen, Lady Susan is essentially a morality tale, reflecting the values of the age of Enlightenment. Jane Austen was interested in human character and what makes someone good or bad. Typical of its era, the novel teaches a lesson about virtue and vice, emphasizing on the virtue of good character. In Lady Susan, the vice is selfishness and the utter lack of consideration for the well-being of others.

Why did Jane Austen abandon the novel after the brilliant first draft? Was Lady Susan designed to be just a character study, a sort of practice, as opposed to a full novel?

It is likely that, with the open sexuality and the frivolous nature of the central character, the novel would have been found scandalous and Jane Austen’s family would have opposed its publication. It would surely have brought shame onto the family and provided an unsuitable kind of publicity for the young, unmarried daughter of a clergyman.

However, in my opinion, Lady Susan displays phenomenal talent of an 18-year-old with great potential to become one of the most clever novels written by Jane Austen. I look forward to the publicity that this minor work deserves through the upcoming film adaptation by Whit Stillman.

References and further reading:
To view the original manuscript of Lady Susan, click here.
Horwitz, B. J. (1987). Lady Susan: The Wicked Mother in Jane Austen’s Novels. Persuasions, Vol. 9: JASNA.
For interesting speculations about the plotting of Love and Friendship, see AustenBlog.
Posted by Anna at 9:16 PM No comments: Links to this post