A Sneak-Peek of Jane Austen 200 in Basingstoke

I'm lucky to live near Basingstoke, a place very familiar to Jane Austen. This was a place she visited several times, being the nearest large town to Steventon, and there are still some landmarks known to her in the town. A small but fairly modern town, Basingstoke has, in my opinion, been spoilt by juxtaposing period buildings and modern, box-like architecture, leaving little of the Georgian feel to the town. However, I did spot a few examples of Georgian architecture on my visit there last week and, with a little imagination, could place Jane Austen there in my mind's eye.

I visited the Willis Museum for a preview of the "Jane Austen 200 - A Life in Hampshire" exhibition together with my children who attended a reading of Jane Austen's "My Beautiful Cassandra". The book, taken from Jane Austen's juvenilia, was written by Jane Austen when she was 12 years old and dedicated to her sister, Cassandra. It tells the story of a girl who wears a bonnet and gets into a lot of trouble one day. The children were delighted with the workshop where they got to make a Regency style bonnet, Jane Austen bookmarks and write with a quill and ink.

I, in the meanwhile, had a chance to look at the exhibition, which is part of a large-scale event to take place in Basingstoke next year. The event is organised by the Hampshire Cultural Trust and will certainly attract a great many visitors to Basingstoke (myself included!). Jane Austen's writing desk, ink pot and glasses, usually looked after by the British Library, have been specially brought to Basingstoke for the exhibition and visitors also get a chance to see the original manuscript of The History of England, which forms part of Jane Austen's juvenilia. Unfortunately, photography is not allowed in the exhibition, but you can see a video about the exhibition on the Hampshire Cultural Trust website.

It was quite touching to see Jane Austen's writing slope, a priceless article in itself. The mahogany article was purchased by Jane Austen's father, George Austen, at Ring Brothers in Basingstoke in 1794, probably intended as a present for his daughter's upcoming birthday. Jane placed the slope on her tiny, round writing table close to the window in the sitting room. At the time, writing slopes held precious and private information and could be taken anywhere with you in the same way that our laptops do these days - a writing slope therefore would have been of utmost importance to its owner. Perhaps Jane Austen kept her letters and manuscripts within it. As Paula Burne writes, the writing slope must also have been of symbolic importance to Jane Austen. It symbolised her father's faith in her and in his encouragement of her writing.

In 1798, Jane Austen nearly lost her writing slope. On her way from her brother, Edward's estate in Godmersham, she stopped at an inn to change horses and her package was accidentally taken to another chaise that was just leaving and the goods would have ended up in the West Indies. Jane wrote to Cassandra,

"I should have begun my letter soon after our arrival but for a little adventure which prevented me. After we had been here a quarter of an hour it was discovered that my writing and dressing boxes had been by accident put into a chaise which was just packing off as we came in, and were driven away towards Gravesend in their way to the West Indies. No part of my property could have been such a prize before, for in my writing-box was all my worldly wealth, £7, and my dear Harry's deputation. Mr. Nottley immediately despatched a man and horse after the chaise, and in half an hour's time I had the pleasure of being as rich as ever; they were got about two or three miles off."


Did you know that Jane Austen wore glasses? We do not usually associate her with glasses as she does not wear glasses in the few surviving images that we have of her. However, it is likely that she only wore them for detailed work, such as embroidery, and perhaps reading and writing in poor light. I was also surprised at how small the glasses really were, almost as if they belonged to a small child. She must have worn them at the end of her nose, as I cannot imagine her wearing them close to the eyes as we do these days, or her head would have been extremely small. The pretty, embroidered (by Jane?) glasses case is absolutely tiny as well. 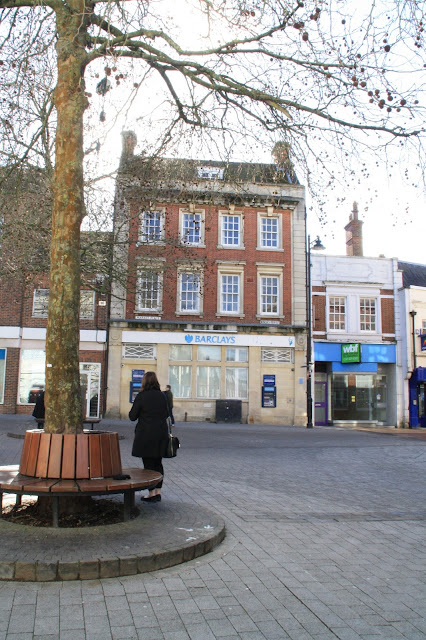 Jane and Cassandra had their first dances at Moot Hall, in the town hall, which in Jane Austen's time was to the right, roughly where Lloyds Bank now stands. 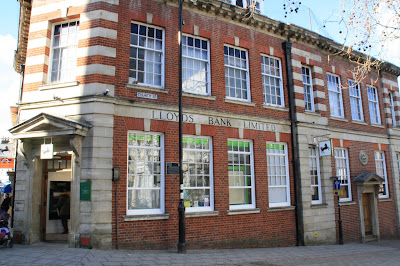 I now look forward to learning more about Jane Austen's Basingstoke in next year's event, which sounds very exciting indeed!

Email ThisBlogThis!Share to TwitterShare to FacebookShare to Pinterest
Labels: Events, Georgian and Regency Life, Her Life

Costumes from Emma on display in Chawton

At the time of my visit to Chawton Cottage on Jane Austen's birthday, there was a special display of costumes from the BBC adaptation of Emma (2009) to celebrate 200 years of Emma. It was lovely to see the costumes so close up and imagine how they would have looked on the actors.

These pretty day dresses were worn by Romola Garai who played Emma in the film. 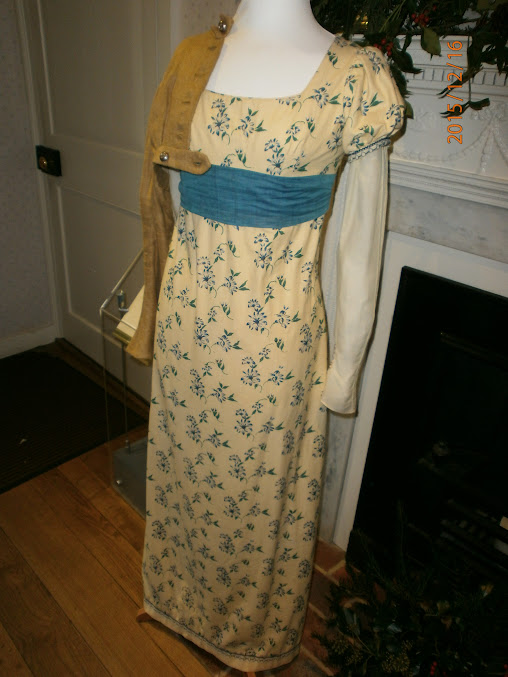 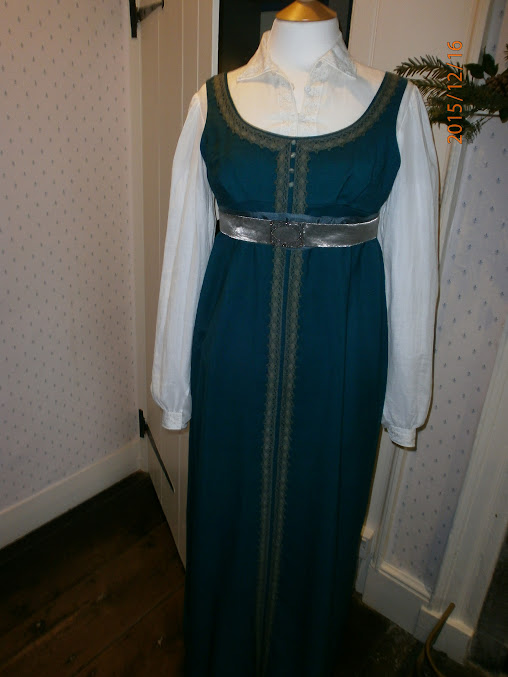 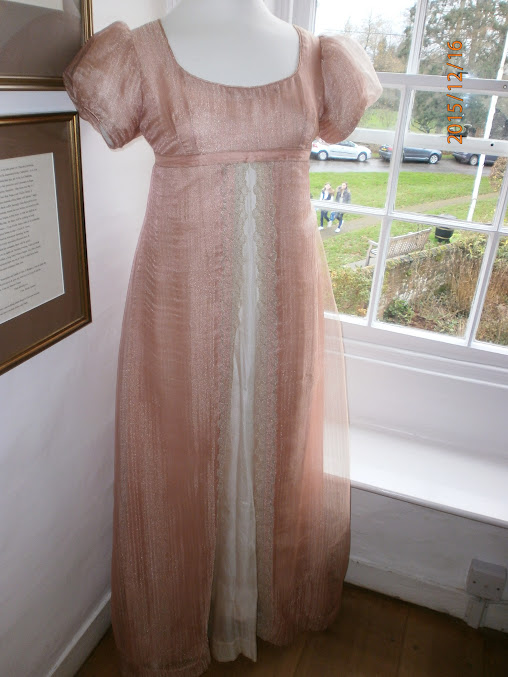 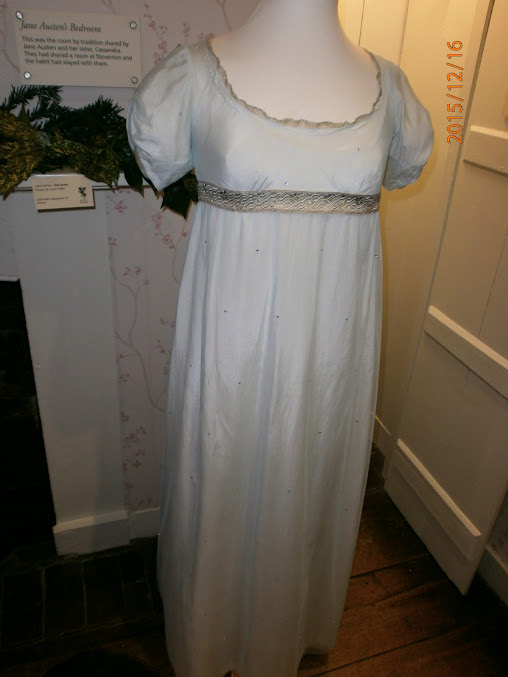 This day outfit was worn by Johnny Lee Miller (Mr Knightley). I apologise for the poor quality of the picture! 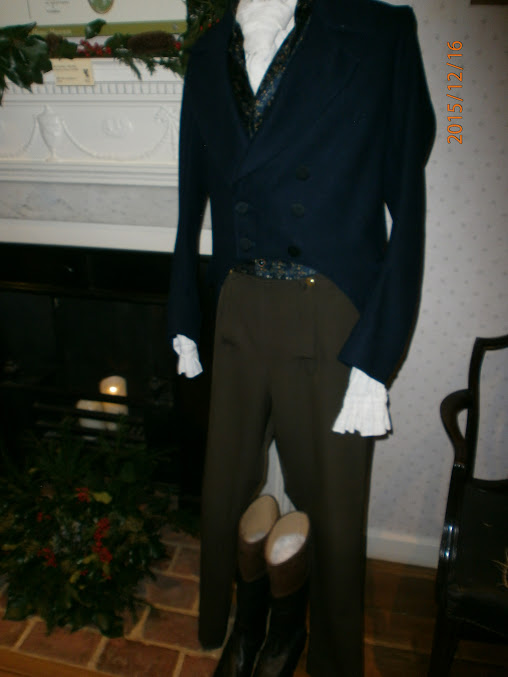 Which one is your favourite? I am partial to Emma's beautiful pink ball gown, but no surprise there!

Posted by Anna at 3:40 AM No comments: Links to this post

I recently visited Tintern in South Wales. Set amidst the hills of the Wye river valley, this beautiful little village is famous for its gothic Cistercian abbey, creating a dramatic, spectacular backdrop to the landscape. 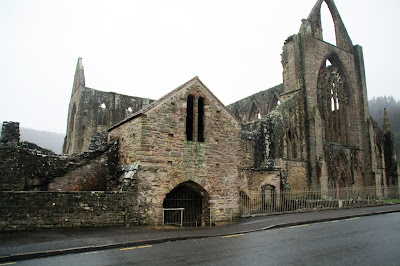 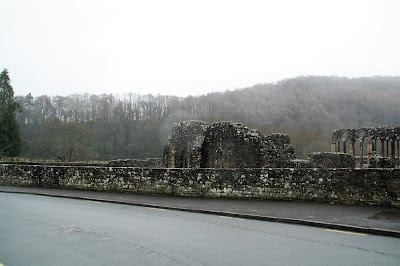 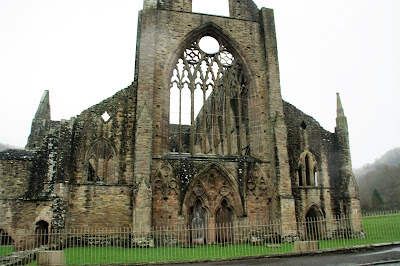 "The room was most dear to her, and she would not have changed its furniture for the handsomest in the house, though what had been originally plain had suffered all the ill-usage of children; and its greatest elegancies and ornaments were a faded footstool of Julia's work, too ill done for the drawing-room, three transparencies, made in a rage for transparencies, for the three lower panes of one window, where Tintern Abbey held its station between a cave in Italy and a moonlight lake in Cumberland, a collection of family profiles, thought unworthy of being anywhere else, over the mantelpiece, and by their side, and pinned against the wall, a small sketch of a ship sent four years ago from the Mediterranean by William, with H.M.S. Antwerp at the bottom, in letters as tall as the mainmast." 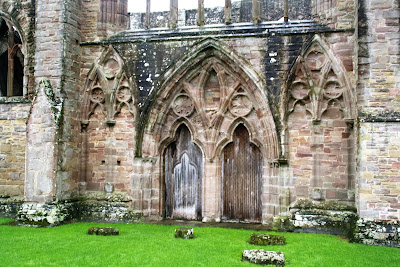 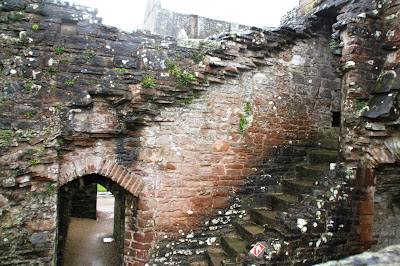 In 1798, William Wordsworth published a poem called "Lines written a few miles above Tintern Abbey". Clearly, Jane Austen was familiar with Tintern Abbey, having read about it and seen popular images of the Abbey, although she is not known to have visited Wales herself. Could it be possible that images of the beautiful, haunting ruins of Tintern Abbey could have provided an inspiration for Northanger Abbey? 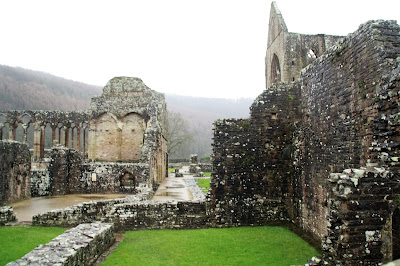 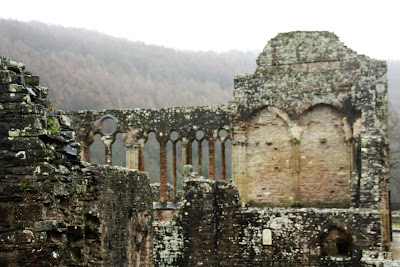 It certainly inspired some of her contemporary writers, such as Sophia F. Ziegenhirt, who wrote a gothic horror novel in three volumes, named "The Orphan of Tintern Abbey", in 1816. Of course, Jane Austen would have been amused by this gothic novel, having parodied and mocked one so wholeheartedly in Northanger Abbey...
Posted by Anna at 4:04 AM No comments: Links to this post