According to family tradition, the most likely person to have touched Jane Austen’s heart, was someone whom Jane met during a seaside holiday between 1801 and 1804. Jane’s nephew James Edward and niece Caroline both mention this event as Jane’s most significant romantic alliance. 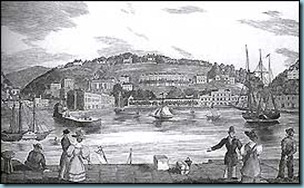 Image from http://bit.ly/qgZBBQ.
In her letter, Caroline remembers that at the time when the Austens lived in Bath, they went to the Devon seaside in the summer, where they met a “charming man”. She wrote, “I never heard Aunt Cass. speak of anyone else with such admiration – she had no doubt that a mutual attachment was in progress between him and her sister. They parted – but he made it plain that he should seek them out again – & shortly afterwards he died! - My Aunt told me this in the late years of her own life.”
No one in the family has confirmed the identity of the person, apart from Jane’s niece Catherine Hubback who seemed to think that Dr Blackall was the person in question. Author Dr Andrew Norman recently wrote a book, resulting in wide publicity, about Dr Blackall being Jane’s true love, her one and only “Mr Darcy”.
However, Catherine was not sure about Blackall being the person in question and did not seem to think that their parting caused Jane great misery. She wrote that her aunt “always said her books were her children, and supplied her sufficient interest for happiness; and some of her letters, triumphing over the married women of her acquaintance, & rejoicing in her own freedom from care were most amusing”.
Although Caroline thought that the seaside lover may have been the greatest of all of Jane’s loves, she did not seem to think that the relationship had gone on long enough to overcloud her happiness. After all, Jane had her books, her freedom and her leisure – to write and dream about her perfect Mr Darcy.
Posted by Anna at 3:19 PM 7 comments: