More to Read About the Festive Season in Georgian England 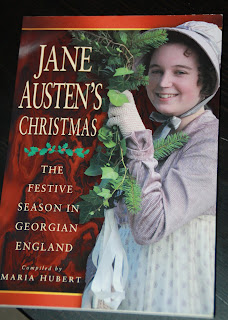 I hope you all had a wonderful Christmas and have enjoyed the festive season in your part of the world. I have enjoyed Christmas here in Hampshire, having visited Chawton for Jane Austen’s birthday and Bath after Christmas with my family.

On my visit to Chawton, I saw this book at a second-hand book shop window, and decided to treat myself to a little present.  Jane Austen’s Christmas – The Festive Season in Georgian England, is a collection of letters and excerpts from Jane Austen’s novels, compiled by Maria Hubert back in 1996.  The book cover had an attractive picture of Polly Maberly/Kitty Bennet of P & P 1995, and it just called out to me. As I knew a thing or two about the Georgian Christmas already, I was fascinated to find out if Maria Hubert had any interesting facts to reveal about Christmas in Jane Austen’s times.

I did not find the book a particularly exciting read, as the information is not presented in a very coherent or interesting way. However, the book does have a  good selection of letters from the Austen family and excerpts from her books that mention Christmas.

As we discover from Jane Austen’s Christmas, Georgian Christmas was a season of balls, parties and other kinds of entertainment. It was a time when families and friends would get together to dance, play games, cards, perform family plays, and eat well just as we do these days. We learn from the letters that there would be many guests and the party season could be quite exhausting for some.  In 1807, Jane wrote to Cassandra after the Christmas guests had departed, “When you receive this our guests will all be gone and going; and I shall be left to the comfortable disposal of my time, to ease of mind from the torments of rice puddings and apple dumplings, and probably to regret that I did not take more pains to please them all” (p. 38).

The book discusses the food eaten at Christmas and the social significance that the various types of food had at the time. For instance, while mutton was the most commonly served meat at the Christmas table, venison was a status symbol favoured by the very wealthy, such as Mr Knightley or Jane’s own brother, Edward, showing that one had enough parkland to graze deer. Turkey was also becoming popular at the Christmas table, as was the tradition of plumcake.

Various games, such as snapdragon, bullet pudding and charades are explained in detail in the book. The Christmas games make Jane Austen’s Christmas sound like a very jolly, playful time indeed! Jane Austen herself wrote some clever charades, which I will have to share with you soon.

As opposed to the contemporary Christmas, which is focused on spending and giving presents, the exchange of gifts was certainly less elaborate in the Georgian times. Presents were exchanged on December the 6th, in commemoration of St Nicholas, as in other parts of Europe. Jane Austen made a little Gingham needle bag for a departing friend in 1792 and wrote (p. 14),

This little bag, I hope, will prove
To be not vainly made;
For should you thread and needles want,
It will afford you aid.
And, as we are about to part,
‘Twill serve another end:
For, when you look upon this bag,
You’ll recollect your friend.

Much of the gifting was centred around charity to the poor.  On Christmas Eve, 1798, Jane Austen writes to Cassandra, “I have given a pair of worsted stockings to Mary Hutchins, Dame Kew, Mary Steevens and Dame Staples; a shift to Hannah Staples, and a shawl to Betty Dawkins” (p. 25).


With Christmas over and the New Year dawning, I now wish you all a very happy New Year and hope to be able to share many more stories from Hampshire in the coming year!
Posted by Anna at 2:58 AM No comments: Links to this post