Exploring the Domestic Lives of the Georgians

I enjoyed watching the first part of the documentary series “At Home With the Georgians” by Amanda Vickery that explores the domestic lives of the Georgians. Unfortunately, I have not been able to get hold of the rest of the series as yet, but the other day my husband surprised me with a copy of Vickery’s book “Behind Closed Doors – At Home in Georgian England” that the documentary is based on. I was keen to read this, as I felt that I could learn a lot from reading about the topic in more detail. 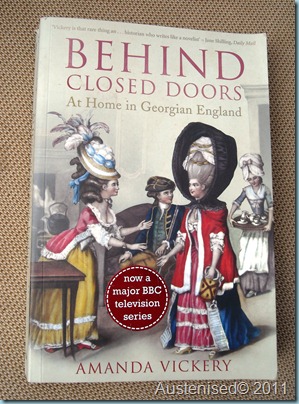 In her study, Vickery delves into historical archives, records and letters to bring out the histories of individuals who lived in that era and discusses their ideas and feelings about the home. She examines everyday household objects to get an idea of the lifestyles and of the aesthetic and practical values of people who lived in the 18th Century.

With her work, Vickery highlights the vital significance of the home for the Georgians. Marriage signified an important transition from being single to becoming a housekeeper – economical, practical and wise. The ideal Georgian home was one that was economically managed, comfortable, yet aesthetic. As one married and became a housekeeper, one’s status would rise immeasurably; it was infinitely better to be married or a widower with a home of one’s own, than to be a spinster dependent on others for support – just as our favourite spinster, Jane Austen, brings out in her novels. Just think of poor Miss Bates…

Amanda Vickery obviously considers Jane Austen’s literature as a valuable source of information for her study, as she frequently cites her characters when exploring the value systems of the Georgian era. Chapter 3, in particular, would interest any reader of Jane Austen, as the chapter is largely dedicated to the voices of Jane Austen’s characters. Here is a summary of some of the interesting themes that Vickery discusses in Chapter 3:

According to Vickery, “Austen relied on the social, economic and emotional importance her readers would attach to the drama of setting up a home” (p.87). Vickery is right to recognise that homes have a huge significance in each of Austen’s novels, and an understanding of Georgian home life would certainly help any of Jane’s readers in following her novels.

It has to be noted, however, that despite the name “At Home in Georgian England”, Vickery’s work concentrates on the entire 18th Century and not only on the times of Jane Austen. While her book is a useful read, I enjoyed watching the TV series more, with its fascinating visual input and frequent dramatisations.