The name now has a face!

Wow! It’s been a while since I posted here. I thought I should comment on a couple of exciting events that have taken place on the Austen front recently.

Starting with the new Jane Austen waxwork, unveiled on July 9th. The waxwork, commissioned by the Jane Austen Centre in Bath, has finally revealed Austen’s true looks with the help of forensic data. 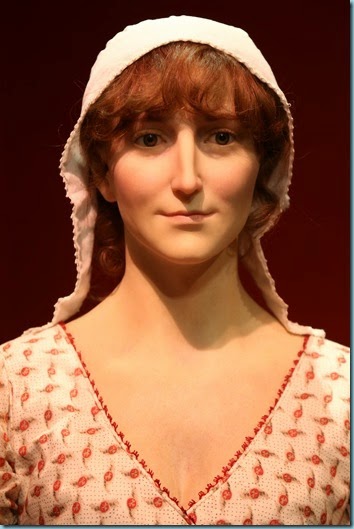 Images from the Jane Austen Centre.

The wax figure of Jane Austen was developed by the FBI-trained forensic artist, Melissa Dring, in conjunction with internationally-renowned sculptor, Mark Richards, and Bafta and  Emmy award-winning costume designer, Andrea Galer. So much detail was put to the waxwork that it took more than three years to finish it, and the result is stunning. 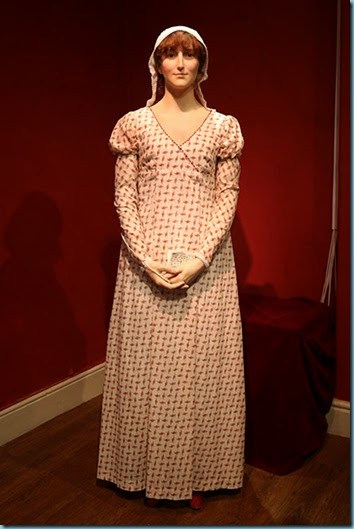 The data on which the likeness is based was gathered from the written accounts of her contemporaries – family members and friends – just as I did as I described in my blog on what Jane Austen looked like.

This can hardly be a small deal for us Austenites, as we must all have been wondering what she truly looked like. I personally feel that the wax figure does do justice to Jane Austen, coming quite close to how I imagined her to look based on all the written accounts. I feel that, being three-dimensional, the sculpture is certainly much superior to Melissa Dring’s portrait of Jane Austen made a few years ago. I’m fairly sure that the sculpture comes closer to the real Jane Austen than the commonly displayed lithography does, and is far more flattering than Cassandra’s sketch of her sister. In conclusion…

What are your feelings about Jane Austen’s new likeness?

Next, I shall continue with the news involving a certain McCall Smith…stay tuned!