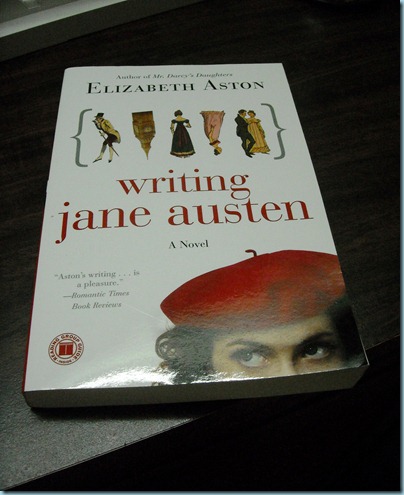 Meet Georgina, an author with a highly acclaimed (yet not successful) debut novel behind her, who has just been told (not asked) by her publisher to write a sequel to an unfinished Jane Austen novel with a deadline of 2 months. Georgina, a researcher of the Victorian era, has never read a Jane Austen novel but is highly critical of her style. The first half of the book describes her struggle to learn to like Jane Austen, until she finally opens Pride and Prejudice, and gets hooked.

Then starts writer’s block. Until p. 221, Georgina has not been able to produce a page for her novel. Once she eventually starts writing, she is faced with one hurdle after another… and with the publishers watching her progress like a hawk and spying on her to get the job done, the process is daunting.

Elizabeth Aston - with a name similar to Austen’s but a style entirely her own - has written a story about the difficulty of writing a book in the style of Jane Austen. We follow the main protagonist through her struggle to write a book, trying to find motivation to start writing, doing research into the period, drawing out characters and a plot in the style of Jane Austen… living and breathing Jane Austen during the writing process.

At the beginning, any Jane Austen fan likely to read this book would not be able to relate to the main character, who has a deep dislike of Jane Austen. It is only when she “discovers” the ingenuity of Jane Austen in chapters 16-17 that you start to identify with the character. I enjoyed these chapters  where Georgina reads one novel after another, unable to put a book down… comparing the experience of discovering Austen to seeing Mozart’s Marriage of Figaro for the first time or a magical performance of Shakespeare’s Much Ado About Nothing, which “left her floating on air for days afterwards”.

This noteworthy piece of modern chicklit delights you with some sharp dialogue and lively characters. Many of the characters resemble those of Jane Austen, such as the snobbish, Lady Pamela – a modern-day reference to Lady Catherine De Bourgh – very disagreeable indeed! Some of the characters, such as the hideous publisher, Livia Harkness,  border the ridiculous and are too unlikely to  be realistic.

The novel does include plenty of delightful references to Jane Austen’s life, showing the author’s familiarity with and love for Jane Austen.  She has also picked out dozens of character names from Austen novels, from Mrs Goddard and Harriet Smith to Dr Perry and a dog called Wickham… but personally, I found this mildly annoying.

Though fairly well written and partly entertaining, the negative vibes from the beginning of the book leave you exhausted. If you are planning to write a book of your own, I would steer clear of this, as Writing Jane Austen will do anything but encourage to write!