The Real Jane Austen - A Life in Small Things 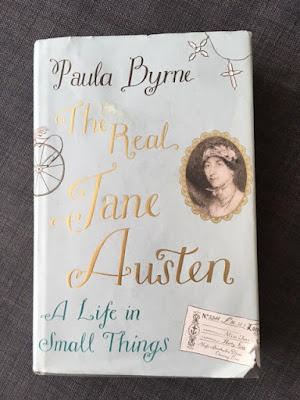 I have recently added a gem to my Jane Austen biography collection: the acclaimed "The Real Jane Austen - a Life in Small Things" by Paula Burne (back in 2014). Now why didn't I get hold of this book before? Perhaps I was prejudiced by the whole heated discussion that took place around Jane Austen's portrait a couple of years ago. Not enough evidence was found to prove that the portrait on the cover of the book, belonging to Paula Burne, was authentic and I just sort of assumed the book to be superficial.

But what I didn't realise was that Paula Burne has actually written a very clever biography in an entirely innovative style; instead of writing a conventional style biography in a chronological manner, she has written a collection of 18 essays on objects that somehow relate to Jane Austen's life, such as her writing slope, and attempts to highlight Jane's character through those. The essays are captivating, and the strength of this biography really is in the detail.

Paula Burne has carried out immense research into the topic and brought out details about Jane Austen's life that have not been delved into in previous biographies. For example, as opposed to the popular opinion of Jane Austen being stuck to her country village and seeing little of the world, Paula Burne shows that Jane Austen was actually very well travelled for someone of her time, detailing the places where she holidayed and visited her friends, family and publishers. Referring to Jane Austen's connections in East India, the slave colonies in America and napoleonic France, Burne shows that Jane Austen had a wide view of the world and strong opinions on the heated topics of her time, such as slavery. She spent a great deal of time in London and, unlike her timid, pious character, Fanny Price, Jane Austen loved going to the theatre and delighted in the private theatricals held by the Austen family. As evidenced by her juvenile writing and looking at the list of her favourite authors, Jane Austen could hardly be considered "prim and proper" as some might think, but was familiar with a world where murders, sexual frivolity, rapes and other crimes do happen - and these were topics that she actually included in her writing from early on.

Like many other readers, I am not convinced about some of her claims, such as the authenticity of her portrait of Jane Austen or  about Tom Bertram being homosexual. But I do appreciate how Paula Burne has described Jane Austen's character in a profound way and brought out a new perspective on Jane Austen - Burne's Austen is a woman who is determined and focused, enjoys her success as a published author, wishes to make herself known and to make a career and an income for herself through her gift of writing.

Given that Paul Burne' s novel approach means that the structure of the book is less coherent than in, for example, Claire Tomalin's, I would not recommend this biography to someone who is new to Jane Austen. The book has certainly strengthened my knowledge of Jane Austen and I would therefore recommend it to others who are already familiar with Jane Austen's life and works but yearn to know more.
Posted by Anna at 3:27 AM 2 comments: