Asks young Catherine Morland, when she first enters the city of pleasures, which Bath was in the late 18th Century. It’s the same question, which I asked myself when I left Bath. I spent the first day walking around Bath with my book, following Jane Austen’s footsteps to the places that she visited and lodged in. One day wasn’t enough, and I had to come back again the next day from my base in Oxford, to see the places where my favourite author had lived. My first views of this beautiful heritage city were enough to get my heart racing. I love the unified architecture of this city, set in honey-coloured limestone, and the views over the seven hills that surround Bath. When Jane first visited Bath, she too must have enjoyed the fashionable balls, shops, concerts and gardens of this beautiful city. It was only later that she grew tired of Bath, having to make it her home instead of her beloved countryside…

To walk in Bath is to walk in Jane’s world. Bath has so completely retained the feel of the early 19th century that little imagination is needed to picture her daily life in this city. 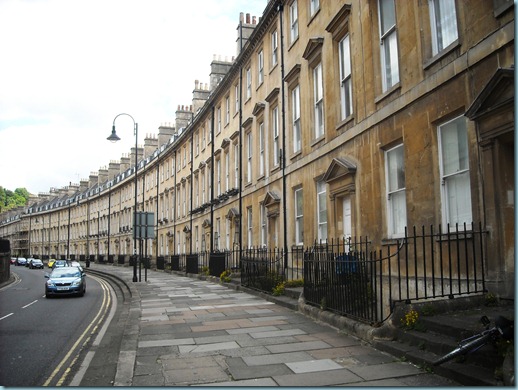 Bath is home to many beautiful Georgian terraces, such as Paragon. This terrace features the typical characteristics of the architecture of the time – raised pavements and wrought iron railings.  I started my walk from No 1 Paragon (below). This was the building where Jane stayed during her early visits to Bath. 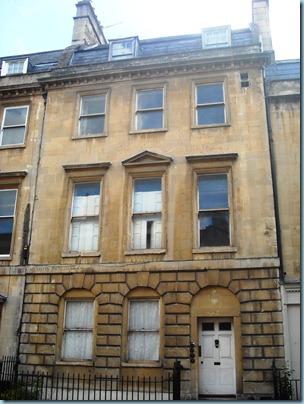 Jane visited her uncle Leigh Perrot and aunt here.  Mr Leigh Perrot had frequent attacks of gout and spent some time in Bath every year to take the healing waters. In 1799, the Leigh Perrots were engaged in a scandal. Mrs Leigh Perrot was arrested for stealing some lace - a crime perhaps set up for blackmail – and spent eight months in jail.

I next turned to George Street. This is where Northanger Abbey’s Thorpe family had their lodgings, in Edgar’s Buildings (below). 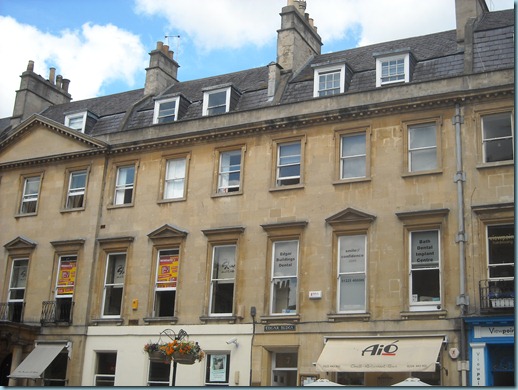 Edgar’s Buildings are conveniently situated across from the fashionable shopping street, Milsom Street (below), where Jane often went shopping. The street is still a vibrant shopping area. Here Catherine Morland from Northanger Abbey visits the Tilneys who have lodgings here. Persuasion’s Anne Elliot meets Admiral Croft here and receives an umbrella from Captain Wentworth. You can see some glimpses of these scenes and read some more interesting thoughts on Milsom Street at Jane Austen Today. 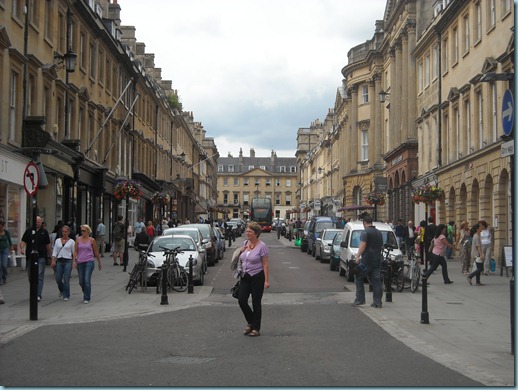 At this point, I visited the Jane Austen Centre in Gay Street, which gave a wonderful view into Jane Austen’s world, with an interesting talk on Jane Austen’s life and some lovely displays of objects and clothes from her time. 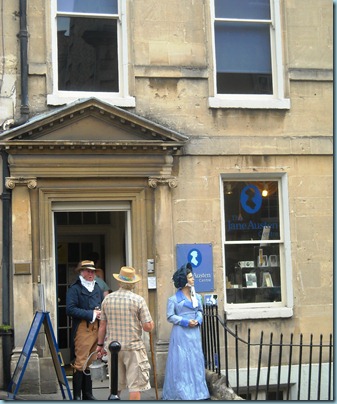 My next destination was Queen’s Square, just around the corner. On the southern side of the square, at number 13, Jane spent a midsummer holiday in 1799 with her brother Edward’s family. She enjoyed her stay here and wrote that the view from the drawing room windows ‘is far more cheerful than Paragon’. 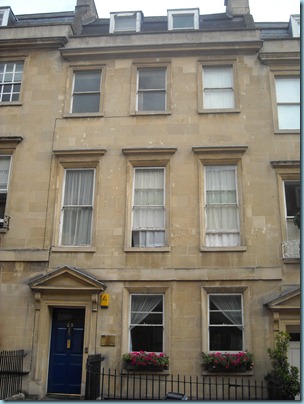 I next headed towards Bath Abbey. It was a Bath University graduation day, and the courtyard was bustling with students in their gowns with their families, as well as tourists, who always crowd this area. 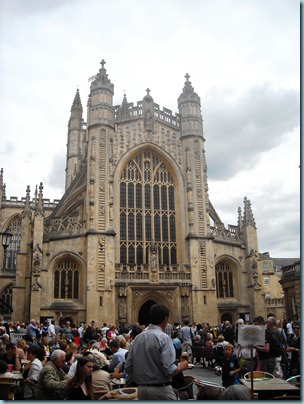 Jane must have attended the services in the Abbey. She certainly visited the Pump Room (below) regularly to take the waters and to socialise. 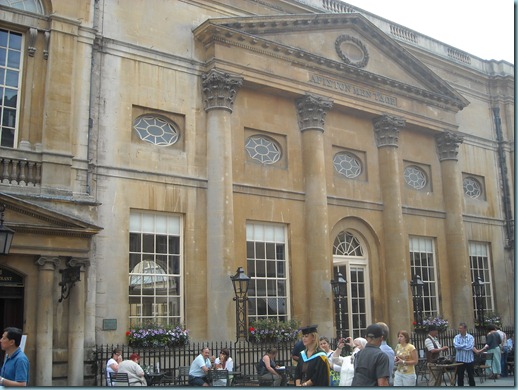 The Pump Room is now the most popular tea room in Bath, famous for its cream tea. The queue was so long that unfortunately I had no time to try the tea! 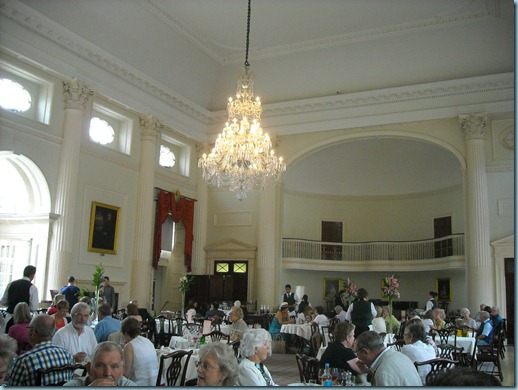 Above you can see the alcove where an orchestra would play music while people were taking their sip of water from the fountain below. 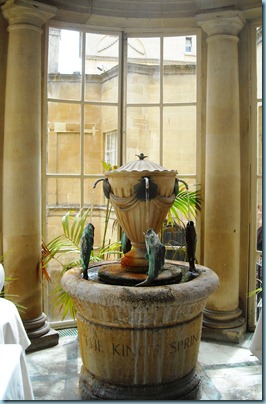 Next, I started walking towards the Avon. The riverside walk was beautiful, with views over Pulteney Bridge and numerous riverboats sliding by. 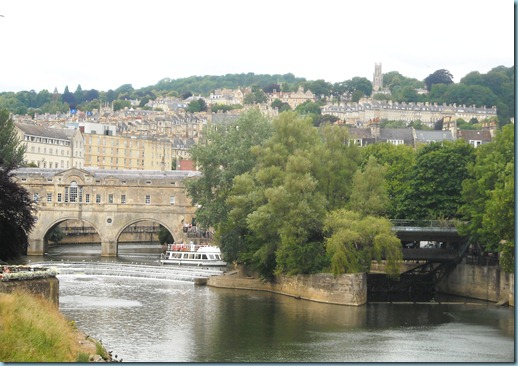 I walked along the river, just as Catherine Morland and Henry Tilney do in Northanger Abbey, towards Lyncombe Hill on their way to Beechen Cliff. I followed the path as it led uphill, and climbed up what felt like 200 stairs.  The walk up the hill turned out to be quite strenuous, but good exercise! 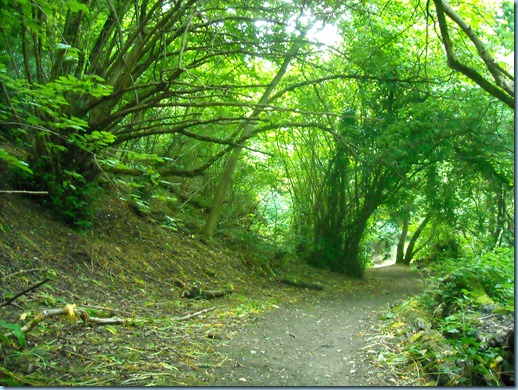 In the end, the magnificent views over the city were totally worth the struggle! 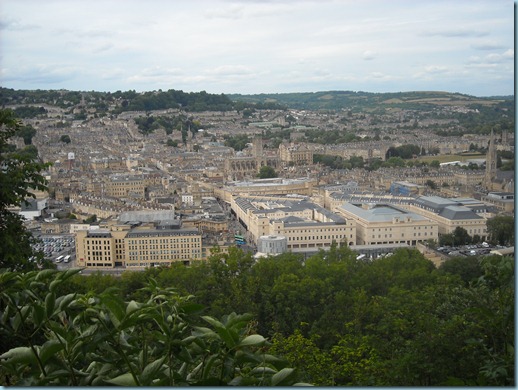 In Northanger Abbey, Catherine feels that ‘when they gained the top of Beechen Cliff, she voluntarily rejected the whole city of Bath as unworthy to make part of a landscape’. I couldn’t agree more. 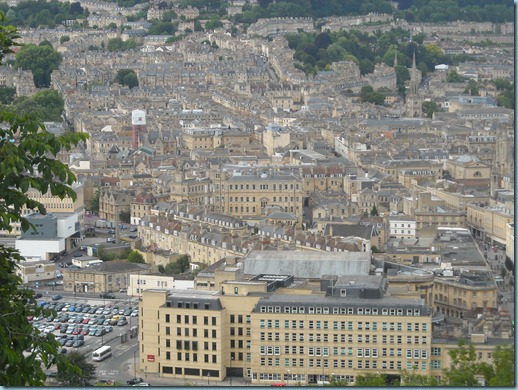