A Review of "Unmarriageable" by Soniah Kamal 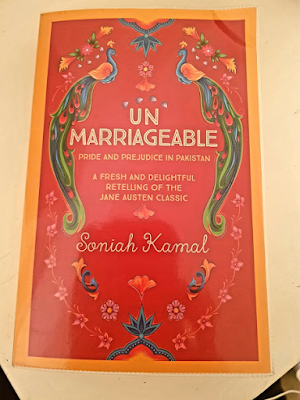 While I don't usually read much fan fiction or spin-offs, I just had to get hold of Soniah Kamal's Unmarriageable, which is a South Asian take on Pride and Prejudice. Having lived in South Asia for 12 years and having got married there, I was sure that this rewrite would resonate with me, as I could relate to the characterisations and contexts - which I absolutely did.

I feel that any of the Jane Austen novels would adapt well to South Asian literature and cinema, a topic which I will explore further in another post. There are so many similarities between Regency society and the social norms of contemporary South Asian culture. The marriage market, the stereotypical over-zealous, matchmaking mothers and aunties, the limited freedom of young women, marital gold diggers, societal taboos surrounding marriage and sex... it's all there in Pride and Prejudice - and in modern-day Pakistan (and elsewhere in South Asia).

Many modern day South Asian girls battle with similar moral dilemmas to girls of Jane Austen's era, with pressure to marry a man of their parents' choice and to give up their careers after marriage. Premarital relationships would be unheard of and illegitimate children a definite no-no - which is why Mr Wickaam turns out to be a villain just like in the original story.

This novel shows a modern, independent, free-thinking Elizabeth - young teacher, Alys Binat - who, like Elizabeth Bennet, isn't afraid to voice her opinions.  Alys, like her sisters, is under tremendous pressure from her mother, Mrs Binat, to marry and marry well. Soniah Kamal's Mrs Binat is very much like Mrs Bennet in P and P, hysterical, ridiculous, and in need of tranquillisers. Alys won't marry the rude, proud, snobbish Valentine Darcee - whose proposal she declines, as he is "unmarriageable". Neither will she marry the riciculous but wealthy, "suitable boy", Farhat Kaleen (Mr Collins). One of my favourite scenes in the novel is Mr Kaleen's proposal to Alys - very much like Mr Collins's - with his premeditated flowery phrases full of praise and pomp.

In Unmarriageable, Kamal really brings Jane Austen's spirit to life. The plot mirrors that of Pride and Prejudice and there are so many parallels between Alys' story and that of the original; the characters and their idiosyncrasies, the humour and wit, but there are also many South Asian references, which are very well explained to someone less familiar with the culture. In the first chapter, in her role as a teacher at an all-girls school, Alys discusses the role of women in Pakistani society -  a wonderful introduction to their world and the issues that girls and women deal with. After that, the story slows down a little and it did take me a while to get into the story, but it got much more interesting towards the end.

There are several references to Pride and Prejudice in the book and, as Alys says (p.227), "we are... a society teeming with Austen's cruel Mrs Norrises, snobby looks-obsessed Sir Walters, and conniving John Thorpes and Lady Susans." I'm pretty sure you could find many a Mrs Bennet, a Lydia and a Mary Bennet in Pakistan as well!