A Tour of Southampton with "Happy Feelings of Escape"

My blog seems to be turning into a travel blog of sorts, as somehow these days I tend to get inspired by my travels across Jane Austen country now that I live surrounded by it. I continue to be fascinated by the life of this strong female figure that lived 200 years before my time and faced very different kinds of challenges throughout her life, but who, despite all odds, managed to produce literary works that have inspired and impacted on so many people after her time.

Besides the exciting events at the Jane Austen Festival last month, my most recent exploration was a spontaneous day trip to Southampton, where Jane Austen lived for a couple of years. Jane liked Southampton, which was a lively town, but as a country girl, she never considered it her home, although she did prefer it to Bath, having "happy feelings of escape" as they left Bath for Southampton.

The Southampton of today is a mismatch of the old and new, considering that most of the old architecture was sadly destroyed in World War II. Sadly, very few buildings exist from Jane Austen's days, and the Old Town is very quickly gone through. However, with a good guide or walking tour in hand, it was very interesting to explore the streets of the Old Town and the places where Jane Austen might have visited during her time there.

I used Jane Austen's Hampshire (by Terry Townsend) and In the Steps of Jane Austen (By Anne-Marie Edwards) as my guide, and I would also recommend you read the detailed blog post by Tony Grant who has described the area with the insight of a local.

Jane Austen first stayed in Southampton in 1783 at the age of 7-8 when she went to boarding school there, run by Mrs Ann Cawley, with her sister Cassandra and their cousin, Jane Cooper. I wrote about the Abbey School in Reading here and here where Jane attended before she was moved to Southampton. Southampton being a port and a place likely to harbour infectious diseases, Jane very nearly died as a result of a typhus outbreak and was forced to return home. Jane, Cassandra and Jane Cooper survived the fever, but her aunt caught the fever and sadly died a few days later. 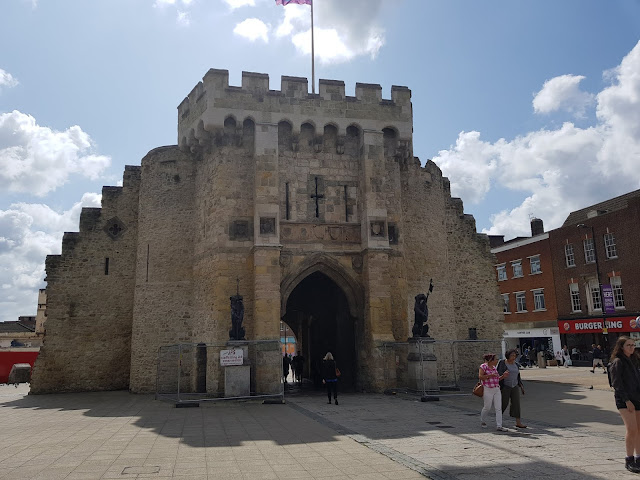 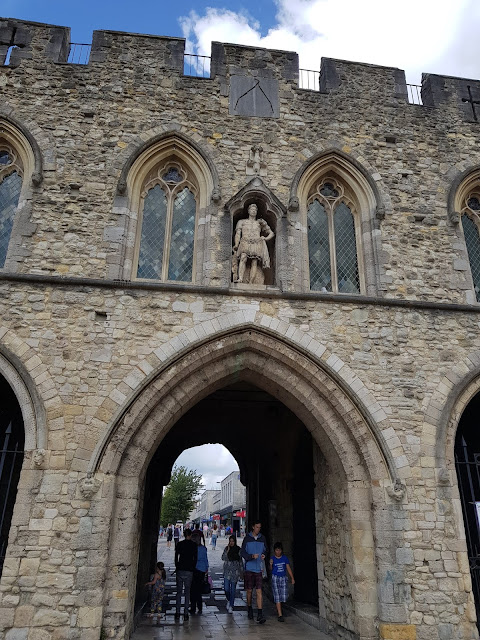 I started my tour from Bargate (above) in the High Street, which served as a gateway to medieval Southampton. Bargate was built by the Normans, dating back to the 12th Century, and is a structure quite unchanged throughout the times. The gateway, the ramparts and the city wall would have been very familiar to Jane Austen. 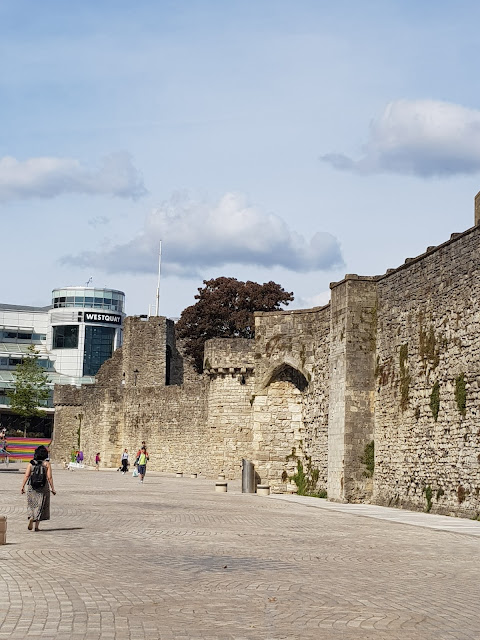 City Wall with Arundel Tower on the left.

Jane Austen returned to the city at the age of 18 for a happier visit, staying with her cousin, Elizabeth, whose father was a sheriff in the city. 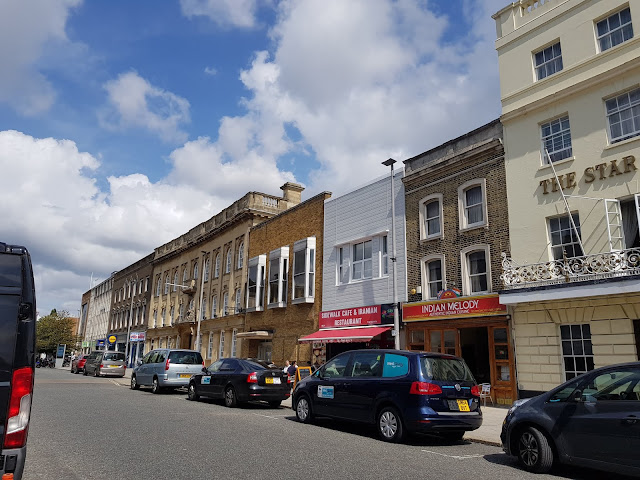 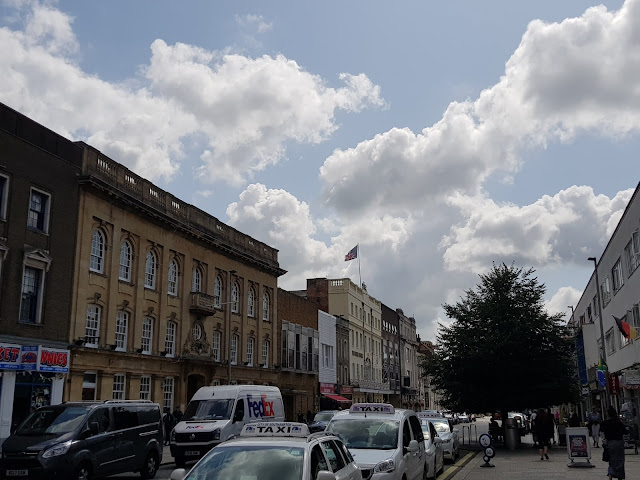 High Street as it is now 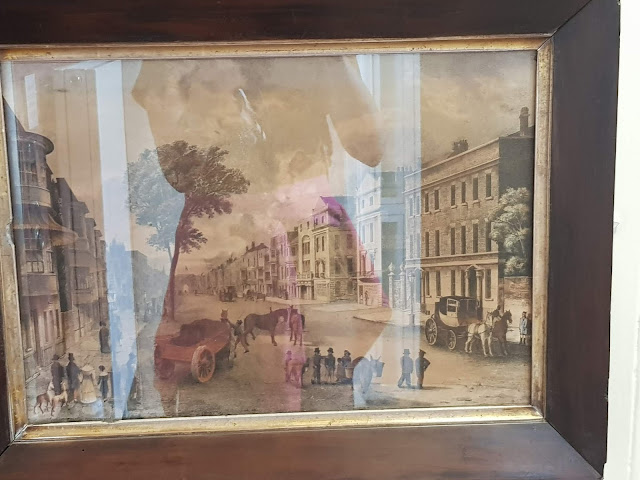 A picture of the High Street in the 19th Century (from the Tudor House Museum).

Jane attended a ball at the Dolphin Hotel in the High Street, which still functions as a hotel. The Dolphin has been the head inn of Southampton for centuries, first mentioned as an inn in 1506, although the present building dates back to the mid-1700's; the bow windows to the street are said to be the largest of their kind. 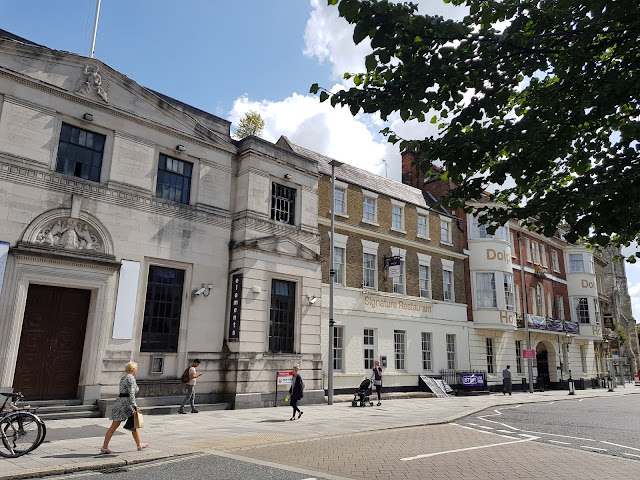 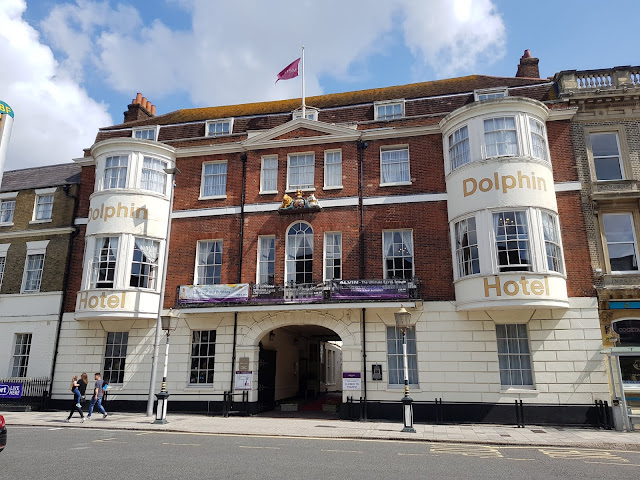 You can visit the ballroom, which now functions as a meeting room and has been renamed "Jane Austen Suite". 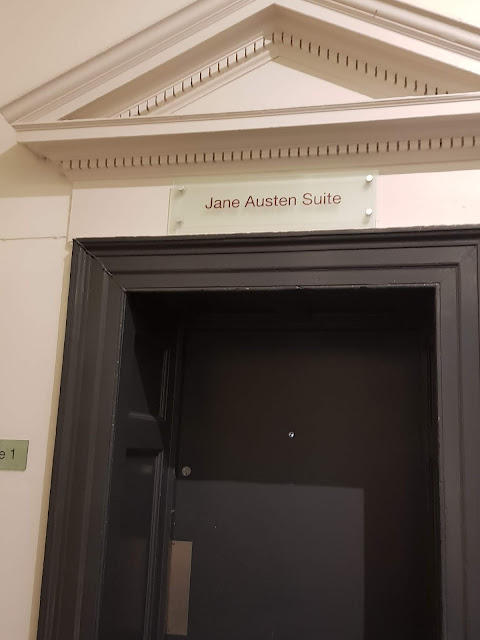 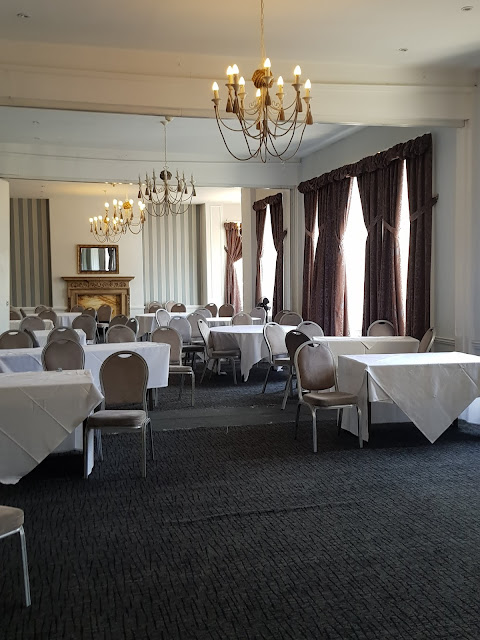 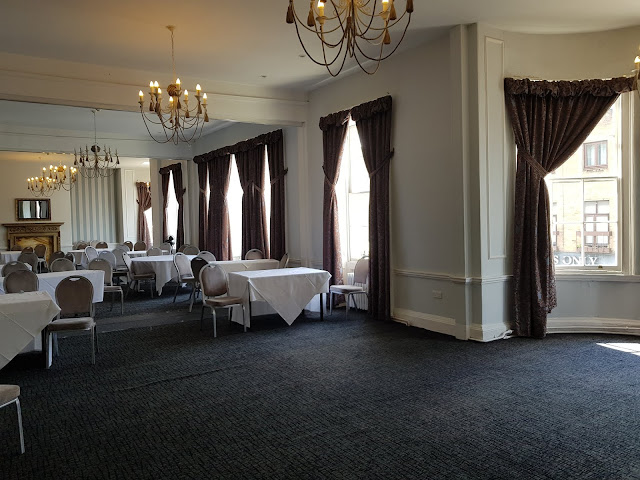 Jane wrote, "Our ball was rather more amusing than I expected...The room was tolerably full, and there were, perhaps, thirty couple of dancers....It was the same room in which we danced fifteen years ago. I thought it all over, and in spite of the same of being so much older, felt with thankfulness that I was quite as happy now as then. We paid an additional shilling for our tea, which we took as we chose in an adjoining and very comfortable room...You will not expect to hear that I was asked to dance, but I was."

Jane next stayed in Southampton after the death of her father in 1805, for two and a half years from 1806 to 1809. For Jane Austen, it was a relief to leave Bath and a comfort to find a home with her brother, Frank, and his wife, Mary Gibson, who was expecting their first baby. The ladies were accompanied by their friend, Martha Lloyd. 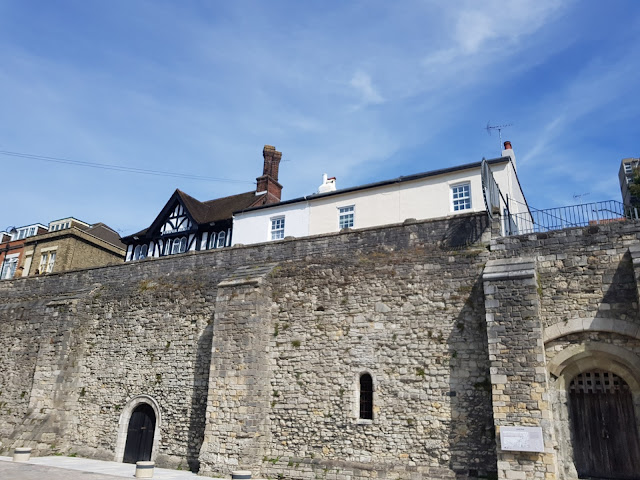 The house would have been behind the wall, somewhere close to where the mock Tudor building now stands. This part of the wall used to house a vault in the medieval times. 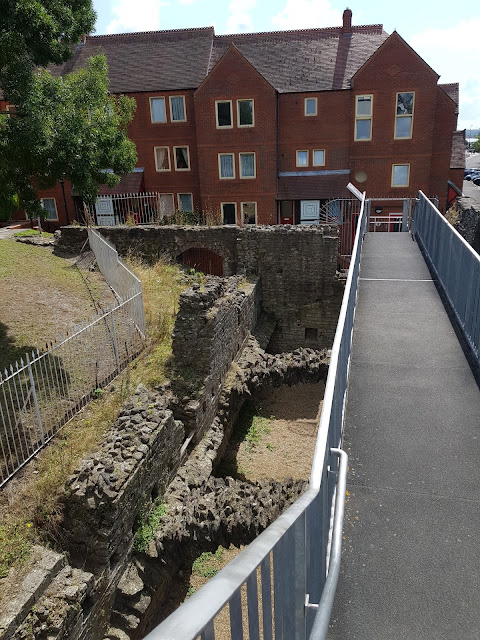 Walking the wall, looking out from Juniper Berry.

The first rented lodgings were too costly and they soon moved to a house at 3 Castle Square, close to the ruins of a medieval castle and surrounded by the city walls. 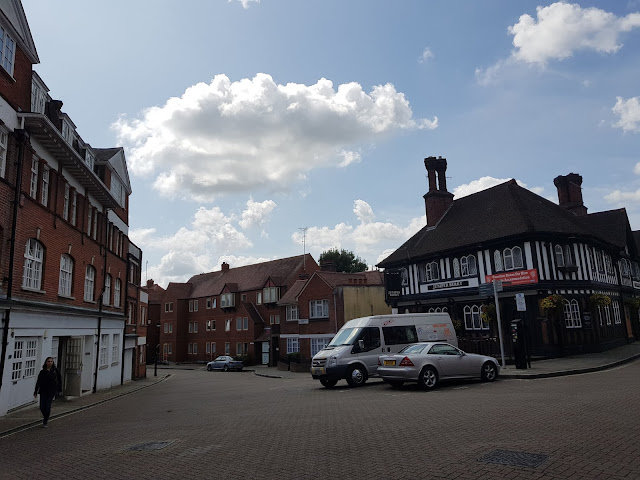 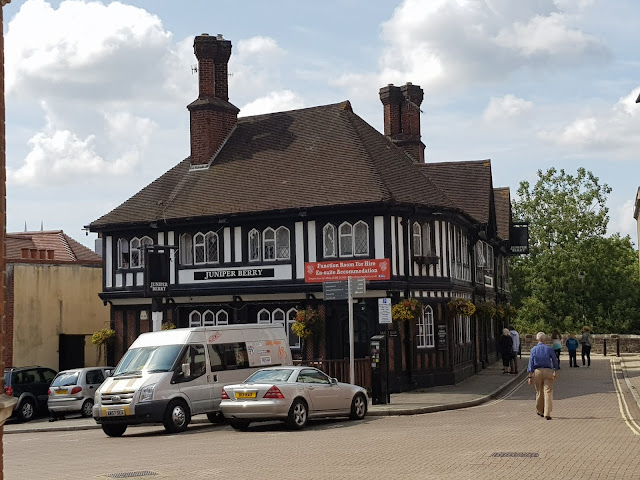 The house was located somewhere behind the city wall, at what is now known as Upper Bugle Street, close to the Juniper Berry pub. The architecture at the square is very modern.


Two years before the Austens moved in, their landlord, The Marquis of Lansdown, built a Gothic fantasy castle somewhere close to the unsightly high-rise in the video; the castle was soon pulled down. Jane Austen describes the castle as a "fantastic edifice" and watched the Marchioness drive out in "a light phaeton drawn by six or eight ponies in graduated shades of brown". 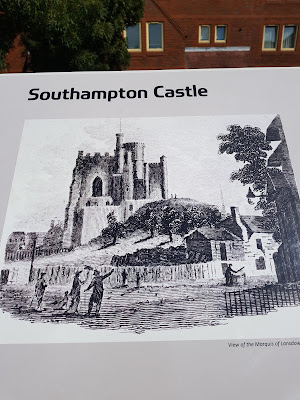 The gothic fantasy castle built by the Marquis of Lansdowne.

This was a pleasant situation for the Austen ladies, as the country ladies at heart would have their own large garden which must have provided some solace from city fumes. Jane Austen planted flowers, fruit trees and currant and gooseberry bushes, and wrote "We hear that we are envied our house by many people and that the garden is the best in town". She also planted a syringa, as described in a poem by her favourite poet, Cowper - something that Jane and I have in common as I absolutely love a fragrant syringa. 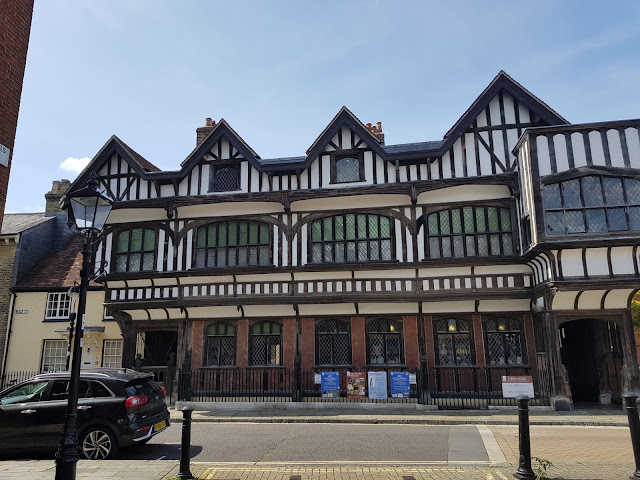 As you walk down Upper Bugle Street, you come across a small square with a lovely church and a famous building called Tudor House. Tudor House is now an interesting museum, which tells the story of the inhabitants of this area across the centuries, also describing life in Jane Austen's days. Wealthy artist, George Rogers, used to live in this part of the house in Jane Austen's times. 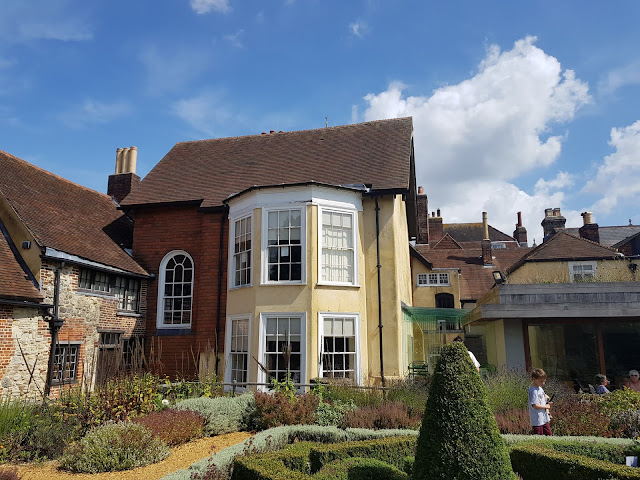 The above photo shows the Georgian section of the house, painted in yellow, with the typical Georgian sash windows. Interestingly, behind Tudor House, you can see King John's Palace - the ruins of a fine stone house dating back to the Norman times (1300's), picture below. 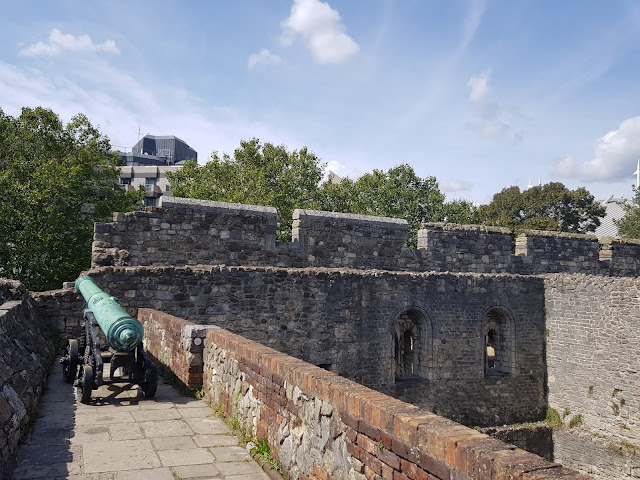 Such a fascinating museum with so many layers of history in one building!

Continuing down Bugle Street, there are a number of interesting period houses from different eras that Jane would have been familiar with. 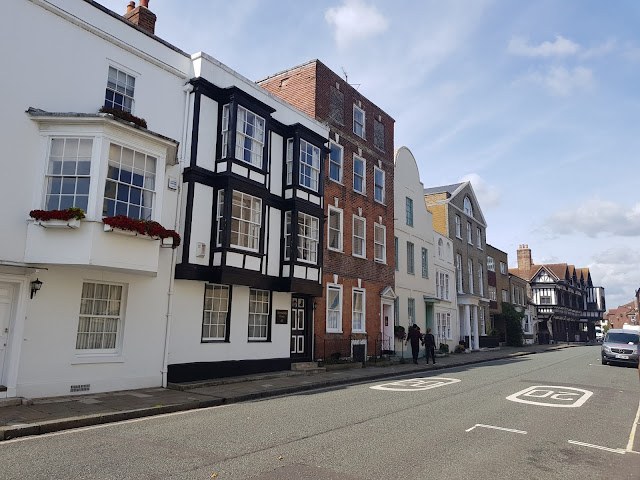 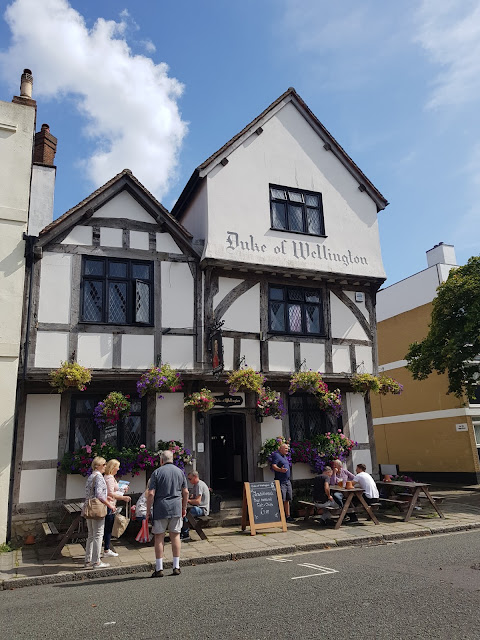 Making a small detour left  onto French Street, there is a medieval merchant's house (below). 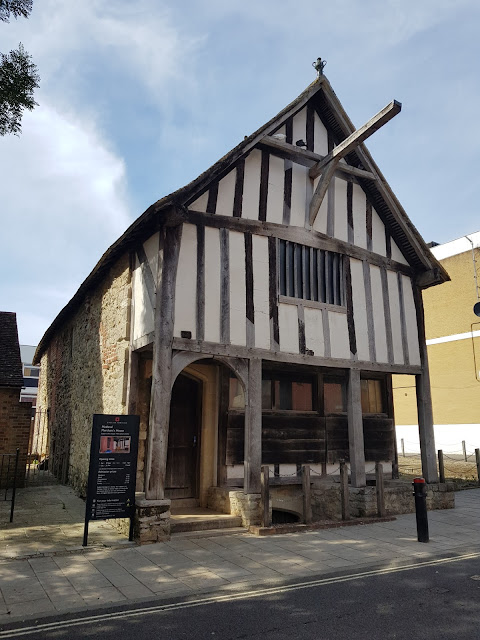 Turning right to Westgate Street, you can see Westgate and the Tudor Merchant's Hall. Westgate led to the quay where the Pilgrim Fathers had started their journey in the Mayflower in 1620. 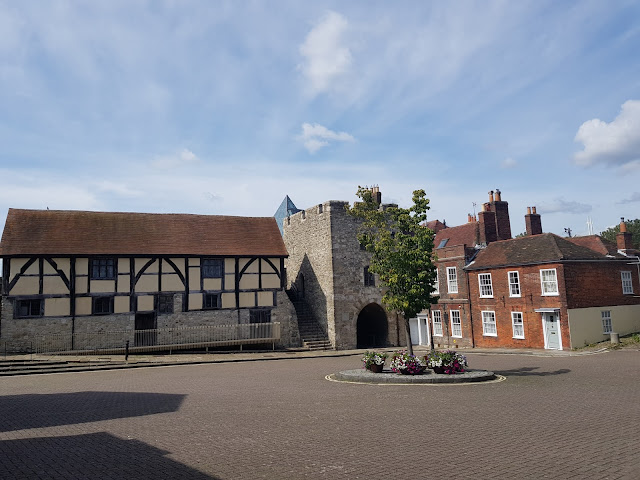 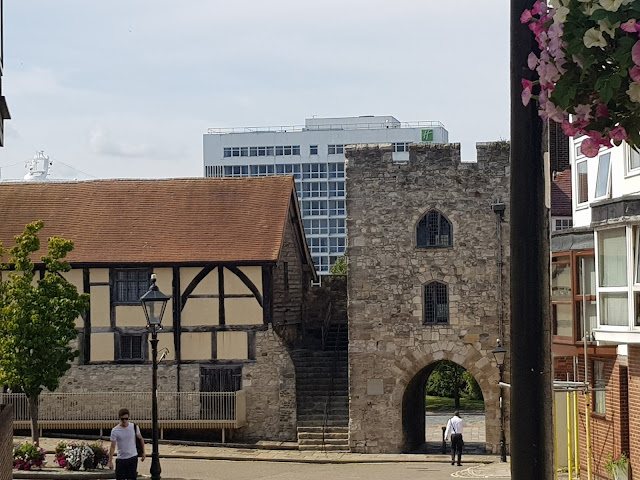 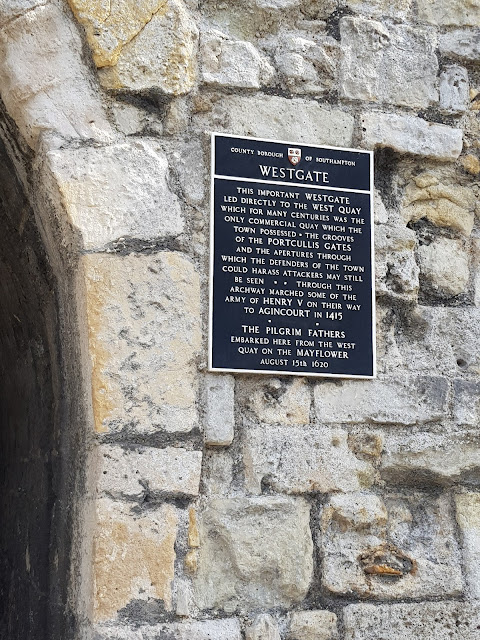 At the end of the street, you will see Wool House (now a pub), which interestingly served as a prison for French prisoners of war. 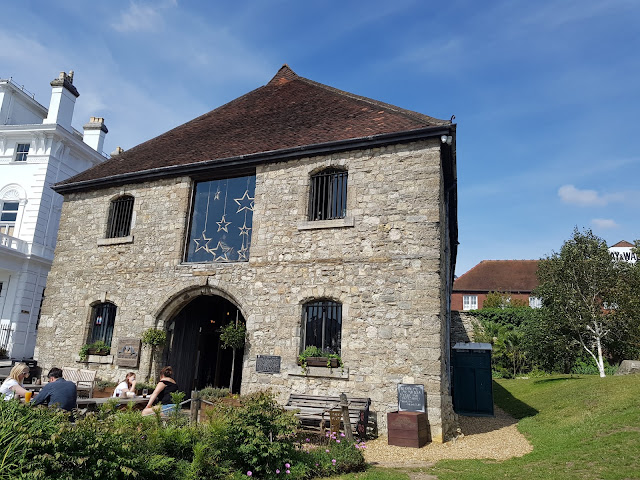 Jane would probably have heard French spoken close to where she lived, and it is fascinating how close in proximity she was to the realities of war and the French Revolution. Despite having an in-depth understanding and knowledge of naval life, she has often been criticised for not touching politics or current issues in her fiction - however, it is quite understandable why she preferred letting "other pens dwell on grief and misery" and focus on what might be considered escapism. "I quit such odious subjects as soon as I can", she wrote - perhaps the realities of war and suffering were too close for comfort.

Email ThisBlogThis!Share to TwitterShare to FacebookShare to Pinterest
Labels: Austen Country, Her Life