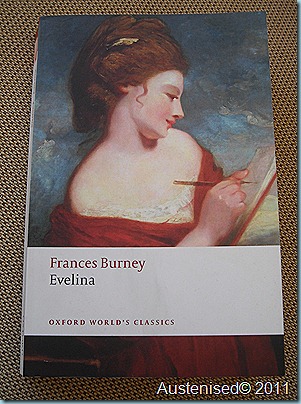 It is interesting to know that the 18th Century author, Fanny Burney, introduced several new words into the English language through the literary form. Through Evelina, she is the first known person to use words which are still so commonplace now, such as a-shopping, seeing sights, break down and grumpy.

Have you ever wondered what inspired Jane Austen to use dialogue as a clever way to personify her characters? Was the romantic charlatan, Mr Willoughby, a product of Jane’s imagination or an imprint of her early reading? Read on!

In her novels and letters, Jane Austen made several references to her favourite authors, and amongst her favourites were always Frances (Fanny) Burney and Maria Edgeworth. Fanny Burney wrote Evelina in the 1770’s, when Jane Austen was still an infant, and Cecilia soon after, and Jane grew up reading these stories. As you read through her novels, it becomes evident that Jane Austen drew inspiration from them. 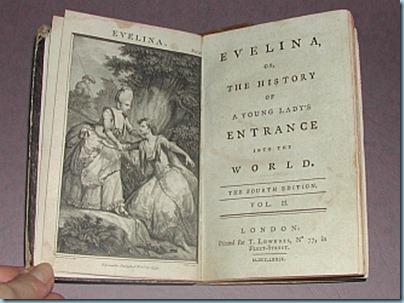 Evelina is a lengthy novel, which was originally written in 3 volumes, according to the custom of the time. Like Northanger Abbey, Evelina is a coming-of-age novel, with the apt subtitle  “The History of the Young Lady’s Entrance Into the World”. The heroine is a girl of obscure birth who has been raised by her loving foster father, Mr Villars, in a comfortable home. Like Catherine, Evelina is set to ‘come out’ and enter the society to lure the attentions of eligible young men.

Evelina is chaperoned to London, where she visits the numerous theatres, operas and pleasure gardens frequented by fashionable society.  As Evelina enters into society, she comes across one odious character after another and must defend her virtue against characters of low morals. Not unlike Catherine, Evelina is all innocence and youthfulness and is shocked to experience the realities of London society. She is repulsed by the lewd behaviour of men that she meets and soon wishes that she had never left Berry Hill, her home. In short, her trips are a journey from innocence to experience (to quote Blake). 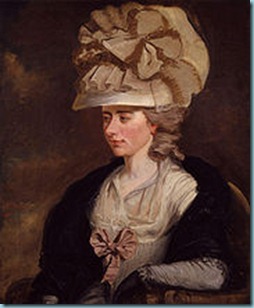 Evelina is a satire of fashionable life. Like Jane Austen, Frances Burney  is an excellent satirist and parodies characters through her excellent mimicry. It is in the dialogue that she really shows her ingenuity. In the preface of Evelina, Burney describes her style as follows:

“To draw characters from nature, though not from life, and to mark the manners of the times, is the attempted plan…”

As a key component of her style, Burney reveals personality through her use of language. Her highest-ranking characters (e.g. Lord Orville, Lady Louisa) use extremely formal register, as opposed to the lower-ranking, more vulgar characters (e.g. Captain Mirvan, Madame Duval), who Burney mimics endlessly.

“The old buck is safe – but we must sheer off directly, or we shall be all aground.”

On the other hand, Madame Duval’s bad grammar reveals her lack of breed and education.

“This is prettier than all the rest! I declare, in all my travels, I never see nothing eleganter.”

As Evelina meets her ‘vulgar’ cousins in London, the scene reminds me of Mansfield Park where Fanny meets her real family in Portsmouth after several years and feels out of place, having got used to the genteel, polished manners of a country house (Burney uses the word “low-bred” to describe Evelina’s relatives). 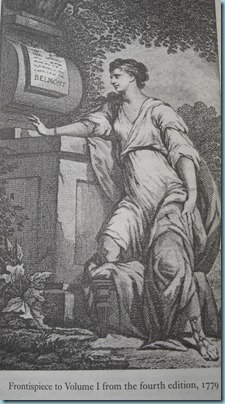 Like Austen’s novels, Evelina too is written in somewhat archaic 18th Century language with a preference for long, complex sentences – a style that Jane Austen certainly assumed. Thankfully, this Oxford edition has been carefully edited by Edward Bloom, with detailed notes on 18th Century vocabulary and manners.

As it was popular at the time, the novel is written in epistolary form – in letters. The epistolary form, which may not always seem realistic, does give the novel a lovely personal touch with its 1st person narration.  Perhaps Jane Austen’s early style was much closer to Burney’s, as her early novels were also written in epistolary form, such as the first version of Sense and Sensibility  (“Elinor and Marianne”) and Lady Susan. Only Lady Susan survives to this day, and it is a novel cleverly written. Lady Susan retains much of the certain mischievous flavour present in Austen’s early novels, which is lacking in her later work.  Evelina reminds me not only of Lady Susan, but of Jane Austen’s juvenilia with the likes of “Love and Freindship” and “The Three Sisters”, with their profligate, even evil characters, speedy plot turnings and plenty of slapstick.

The scenes in Evelina do reveal much more of the period than Jane Austen does. While Jane Austen chooses to leave out details, which she felt were unnecessary or perhaps unpleasant to narrate, Evelina contains plenty of references to prostitution, rape, racism, and other things, which were certainly prevalent in the society of her time. 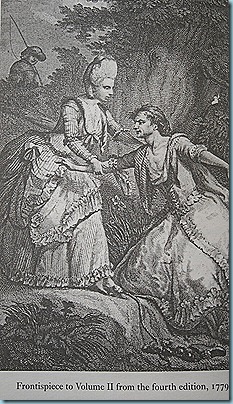 Did the frivolous seducer, Sir Clement Willoughby, inspire Jane Austen as she created the character of Mr Willoughby to seduce Marianne in Sense and Sensibility? Like Mr Willoughby, Sir Clement is a romantic character with no intention of marrying Evelina. Luckily, as a smart enough girl, Evelina is not lured by his charms, seeing through his false pretentions, and turns down his attentions (which were becoming a bit too much anyway!).

The initial scene with Evelina’s future husband, Lord Orville, reminds me of the first meeting between Elizabeth and Darcy at the ball in Meryton. In this scene, Elizabeth overhears Darcy describe her as ‘tolerable but not handsome enough to tempt me’.  Similarly, at a ball, Evelina’s friend overhears Lord Orville put Evelina down as a “pretty modest looking girl…a silent one…a poor weak girl” and she recounts this to Evelina. As a result, Evelina is in awe of him and like Elizabeth, feels embarrassed of her obscure status and her “low-bred”, vulgar relations. Interestingly enough, the title for Pride and Prejudice was famously taken from the last chapter of Burney’s Cecilia, which I shall attempt to read next. It will be interesting to see if there is any further similarity between the two novels. 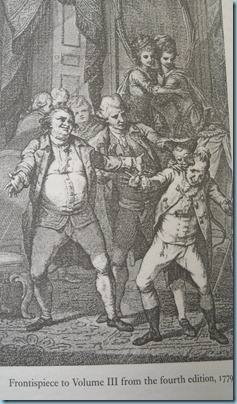 Frances Burney has certainly influenced Jane Austen in her creation of storylines and her literary style.  The clever use of dialogue to personify the characters is something that Jane, like Burney, adopted from early on. During Jane’s lifetime, Burney was a far more popular writer - perhaps because Austen wrote more about everyday life and Burney was better versed with the fashions and amusements of the day – her novels would probably have made better popular literature.

However, it was Jane Austen who is considered the first great female writer and one of the pioneers of the novel. Her wit and depth in depicting the human character are beyond comparison. It is writers such as Fanny Burney who paved the way for Jane Austen and certainly contributed to her later success.