The last place that I visited on my trip around Steventon was Wootton St Lawrence, which has some fascinating connections to Jane Austen and her love life in particular.

Wootton is where the estate of Manydown was located, just 2,5 miles west of Basingstoke. Manydown was the home of Jane Austen's great friends, Alethea and Catherine Bigg, and their brother, Harris Bigg-Wither. Jane often visited them, staying overnight after a ball in Basingstoke. 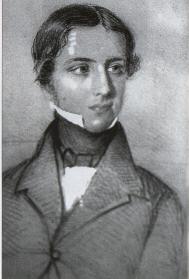 In 1802, Harris proposed to Jane and was accepted, but she changed her mind overnight - a decision, which she may or may not have regretted in the years to come, but one that certainly had an effect on her. I discussed the situation in an earlier post, Jane Austen's Love Mystery.

Unfortunately, Manydown Park no longer exists, as the building was pulled down in the 1960s; however, there are references to Manydown all over the village. 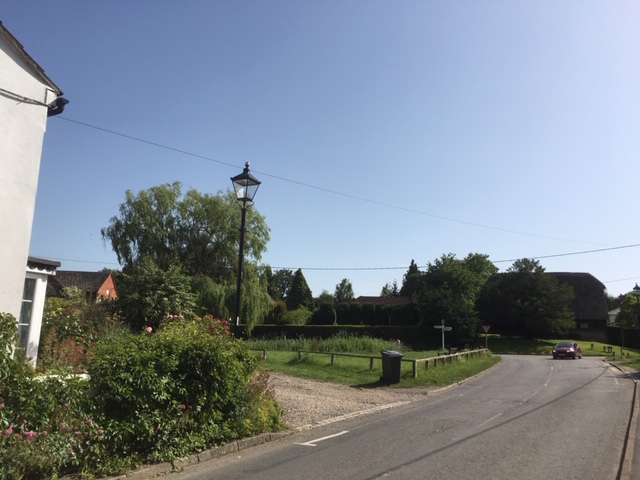 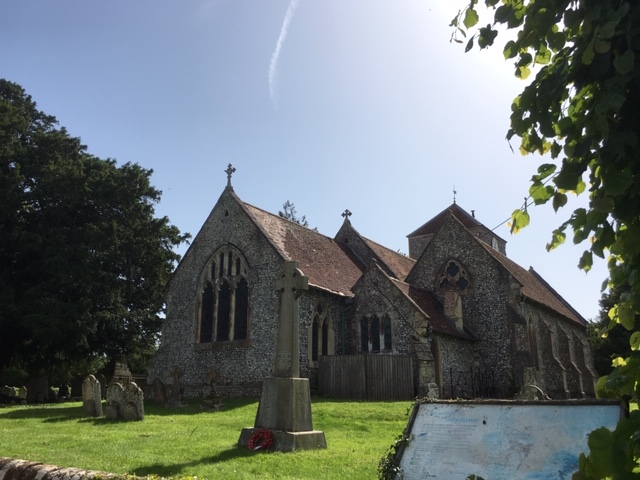 Wootton St Lawrence church is a great place to visit, as it is a church that Jane Austen visited with her friends and where she would have worshipped, had she gone ahead with the engagement. This is also a place where Harris Bigg-Wither is remembered. 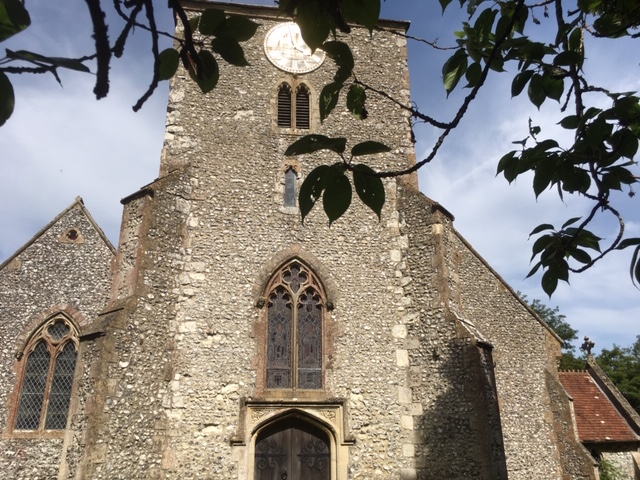 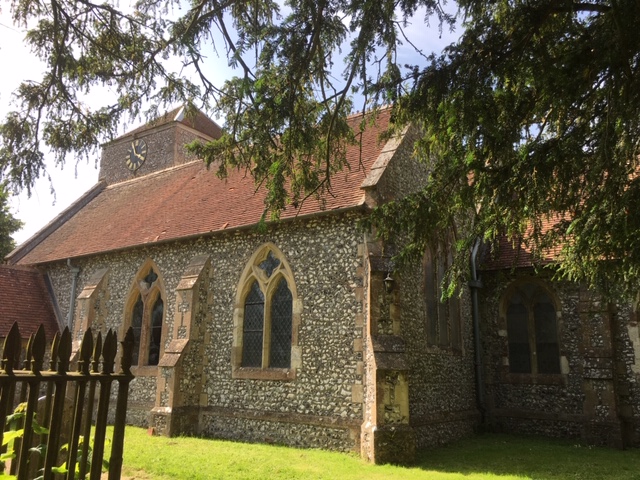 I was not able to find Harris' grave, as the names on the tombstones were covered in moss. However, there is a well-preserved memorial plaque to Harris Bigg-Wither inside the church as well as to his family members. 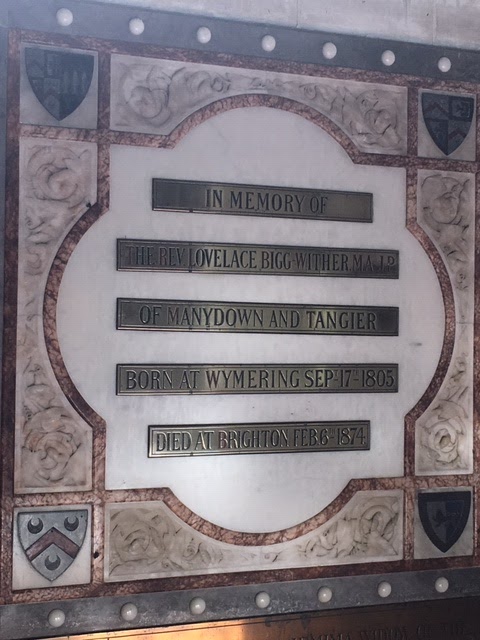 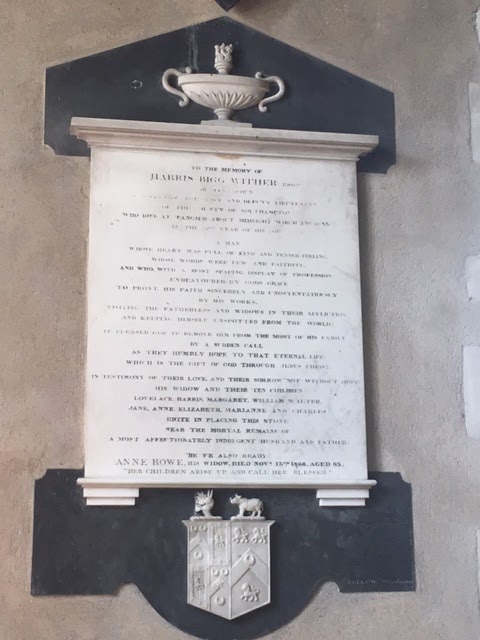 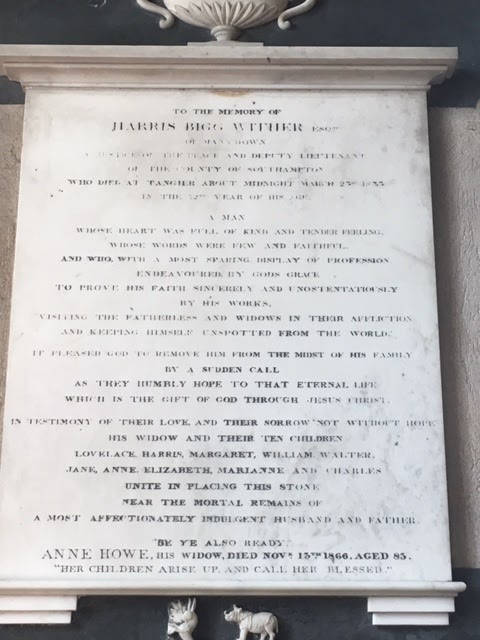 The memorial reads as follows:

"To the memory of Harris Bigg Wither Esq
Of Manydown
A Justice of the Peace and Deputy Lieutenant of the County of Southampton
Who died at Tangier about midnight March 23rd 1833
In the 52nd year of his age.

A man
Whose heart was full of heart and tender feeling,
Whose words were few and faithful
And who, with the most sparing display of profession
Endeavoured by God's grace
To prove his faith sincerely and unostentatiously
by his works.
Visiting the fatherless and widows in their affliction
And keeping himself unspotted from the world.

It pleased God to remove him from his family
By a sudden call
As they humbly hope to that eternal life
Which is the gift of god through Jesus Christ.

In testimony of their love, and their sorrow, "not without hope"
His widow and their ten children
Lovelace, Harris, Margaret, William, Walter,
Jane, Anne, Elizabeth, Marianne and Charles
Unite in placing this stone
Near the mortal remains of
A most affectionately indulgent husband and father.

Based on this recount, put in more modern words, Harris sounds like a very quiet, painfully shy but kind man who was an honest, modest and caring family man.

Interestingly, one of his children was called Jane!

There is also an engraving of Manydown Park on one of the church windows, barely visible in this photo. 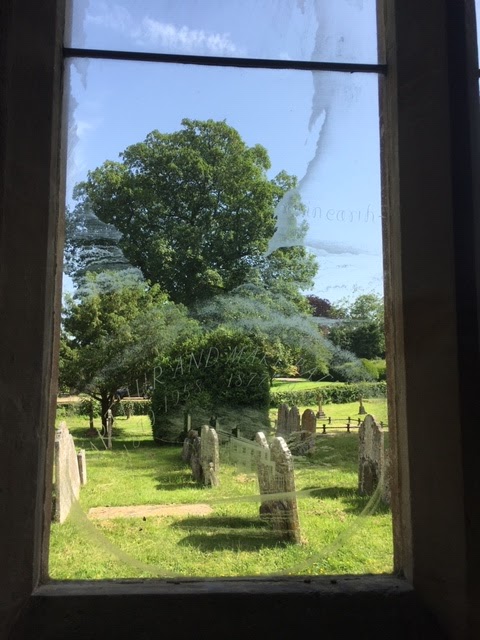 As I drove through the leafy country roads on the Manydown estate, I imagined Jane thinking (like Elizabeth in P & P ch. 43), "Of this place... I might have been mistress!"

Still, I somehow feel that she would have been happier with her six children, as she called her great novels, rather than as a mother of 10 children and as a wife of a shy, reticent clergyman, with no literary achievement to call her own.

Email ThisBlogThis!Share to TwitterShare to FacebookShare to Pinterest
Labels: Austen Country, Her Life